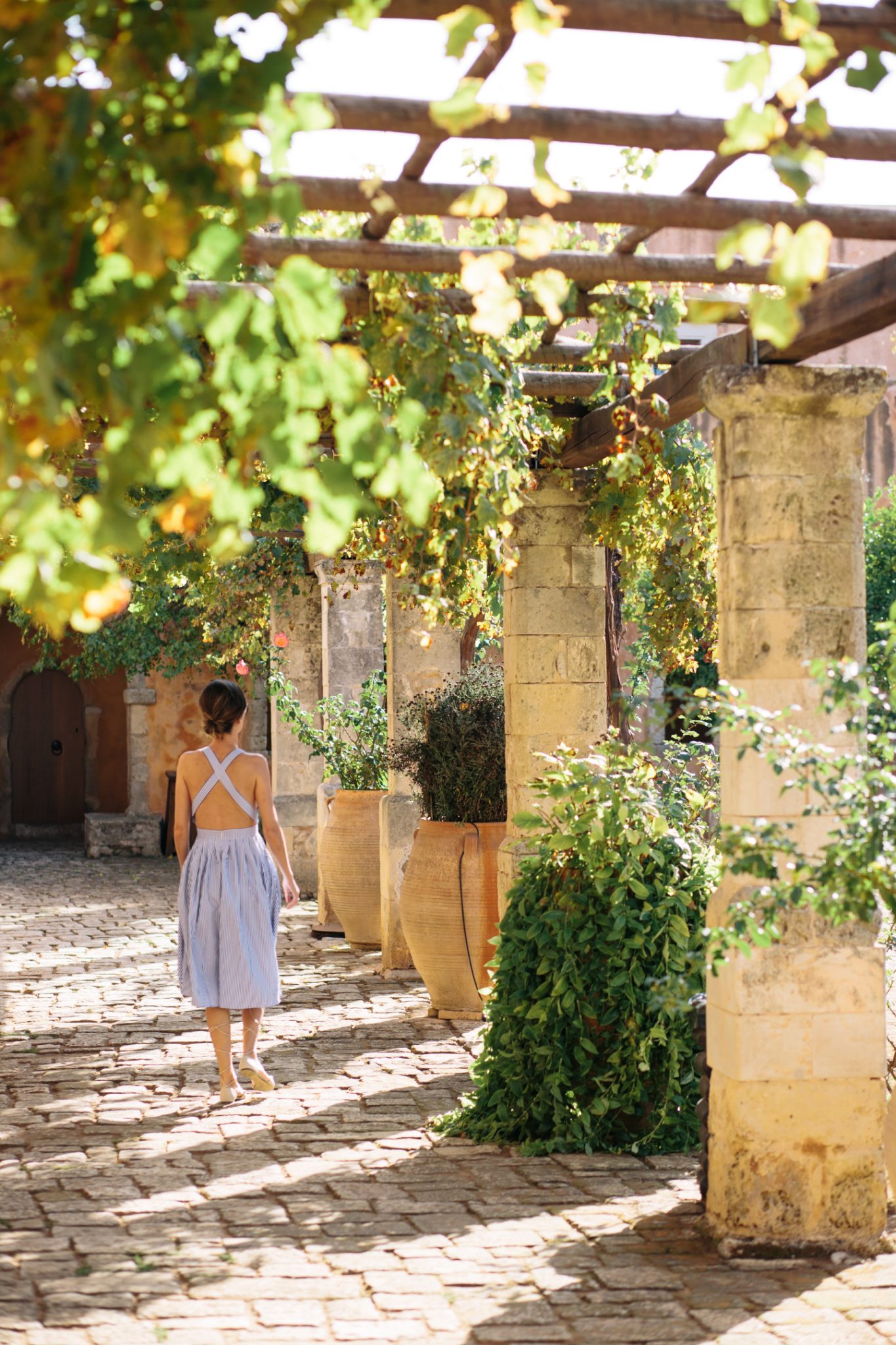 Arkadi Monastery (Moni Arkadhi in Greek) was our second stop at the start of our adventures in Crete.

It is known for its beautiful church with stunning facades but also the tragic events that took place here and became a symbol of Crete‘s fight for independence in 1886.

This year, the monastery was celebrating the 150th anniversary of these events and we’re lucky enough to visit when it was beautifully decorated.

The drive to the monastery is an experience in itself.

If you drive from central Rethymno, it takes around 30 minutes to get there, traveling through few small villages following the main road until you reach the peak of the hill, with a small taverna and the monastery.

_column_text]As we entered the grounds we saw a few monks walking around, cats sunbathing right in the front of the church and no tourists in sight.

The church was glowing in afternoon sun, decorated for the ceremony that took place later that day.

A little bit about the history, if you’re interested:

The monastery was allegedly founded by a monk named Arkadios at the beginning of 13th century. It is widely known not just in Greece but around the world as a symbol of self-sacrifice, freedom and heroism during the period of Cretan Revolution against the Turkish occupation in 1866.

The events that took place here are often referred to as the “Cretan Holocaust” and are considered to have changed the fate of Crete. Almost one thousand people sought refuge in the monastery, most of which were slaughtered by the approaching Turkish troops. At the end of the three days of fighting, most women and children were hiding in the gun powder room and resisting the attacks. As the Turks arrived at the door of the gunpowder room, the Cretans blew up the barrels of gunpowder, choosing to sacrifice themselves rather than to surrender to the Turkish soldiers.

Even though the events did not stop the Cretan insurrection, it attracted attention of rest of the world.

Even with such a sad history, you’re guaranteed not to get depressed in here.

Beautiful rose gardens, stunning architecture and the peace of this place will capture your heart.

If you’re planning a trip to Crete, this place is a must see.

During the season, there is a taverna just outside the monastery where you can enjoy a lovely lunch and a beautiful view.

Just keep an eye on the local guards, they’re always on duty!

But before you head home, stop over at this lovely place we found on our way back to Rethymno, family run taverna with lovely views of the surrounding hills and one of the most charming garden views I’ve seen.

You’ll get the proper village experience with tractors parked just by the main road, goats singing their evening songs in perfect symphony and grandma with grandpa enjoying their afternoon coffee by the restaurant entrance. The menu includes the traditional salads and some exotic options from the grill, like the grilled rabbit we had.

Mostly, I was just captivated by the two butterflies chasing each other between the plants and the lush sanctuary created by autumn coloured trees. We toasted to the beautiful day behind us, looking forward to spend the evening browsing the cobbled street of Rethymno in search of another adventure.