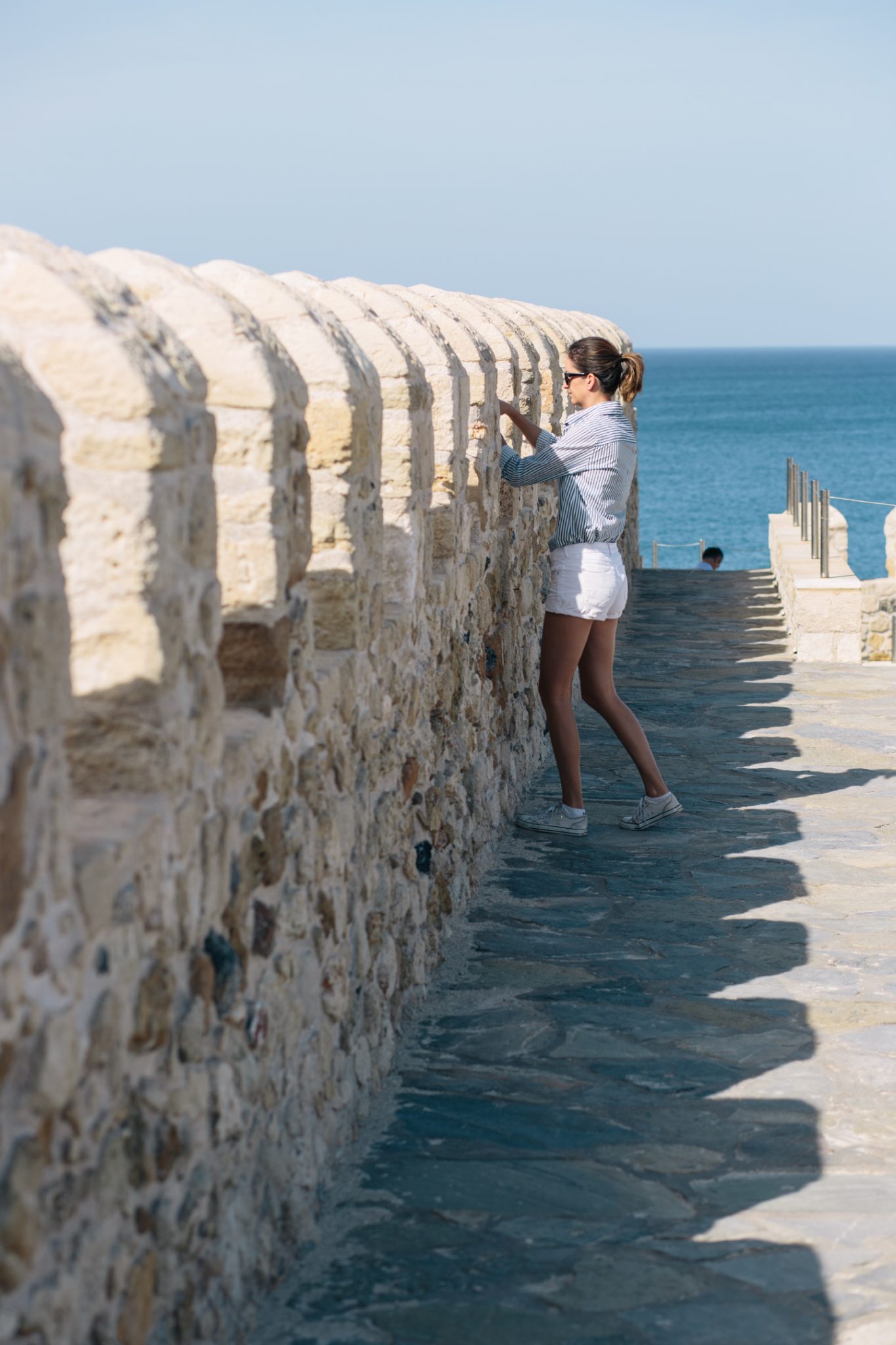 Heraklion is the capital city of Crete and the place where we spent the second half of our mini holiday.

There wasn’t anything in particular that has drawn me to this place.  OK – maybe the proximity of wine villages probably played to its favour.

We drove from Rethymno towards Heraklion (just under 1 hour drive), passing giant hills, beautiful seaside and enjoying stunning views all around.

After spending a couple of days in Rethymno, I found it hard to find anything appealing about the capital city.

Probably the prettiest part was the harbour area with Venetian style Fortezza, similar to the one in Rethymno but much smaller.

We stayed in a hotel a short walk away from the harbour and on our first day, strolled around until we found somewhere nice to have a drink and laze around.

As I mentioned earlier, the center of the city is nothing like Rethymno – no cobbled streets, cute alleyways and charming restaurants around every corner.

Heraklion feels much more industrial, with busy traffic, messy-looking neighborhoods and the harbour which I was hoping to be the most impressive was also a disappointment.

Despite that, if you have a day to spend here, you should take it – there is a fantastic restaurant right opposite the fortress specialising in seafood – you will see which one because there will be locals queuing outside.

Each restaurant has its own twist on it so try and see which you like the most.

Just around the corner from the restaurant is a small promenade which normally boasts an array of restaurants with a beautiful sea view, but in November they were all closed down.

This side of town was pretty peaceful, it seems like just as in Cyprus – no one really walks here and everyone gets around mostly on scooter or car.

We took a very long walk and ended up at the Natural History Museum, by a chance. Seeing a giant dinosaur just outside of it was enough to draw me in.

We came just in time for an earthquake simulation.

Yes, there is such a thing!

You sit down in a small classroom set on a moving surface and listen to the instructor who tells you what to do in case of an earthquake. He also pointed out all the biggest earthquakes around Greece, majority of which were hitting around the area of Santorini.

I was excited like a little kid sitting on a roller-coaster for the first time. Until the simulation started. He started of easily, with some small movements, basically the ground shifting from side to side.

While it wasn’t super scary, I got freaked out when I imagined I would be in the house and the whole house would be surfing those waves with me.

I was trying to imagine many times what an earthquake feels like and this seemed pretty real. My husband has been through two of them, one quite major one with an epicenter close to our house when he barely managed to get out of the house (apparently that’s not what you’re supposed to do).

The simulation started with a small earthquakes, first the movements if you’re on the ground floor and then the same one when you’re higher in the building, which feels much much worse.

Then two of the biggest earthquakes followed (see below).

There were books falling of the shelves, chairs travelling in the room and I was squeezing the hell out of the table in the front of me.

After we were shaken, shuffled and recovered, we ventured further into the wilderness.

We met these handsome guys, winking their eyes and flipping their tale. Shame our little one wasn’t with us, he would be pretty freaked out by them (and as a sensible mum I would be recording everything of course).

.I have lived in London for many years and one of many things I miss from there are the amazing museums. This one was on much much smaller scale, but I was impressed that they actually have some living things here too (and the museum shop had pretty cool gifts not just for little people).

If you venture out to Heraklion, there are few museums we gave a miss (Archaeological and similar) and the coastline is not very well maintained. The city is great as a base, but to experience proper Crete, venture to the small villages nearby – update on that coming soon – and yes, it involves wine again!

Hope you’re having a wonderful weekend.