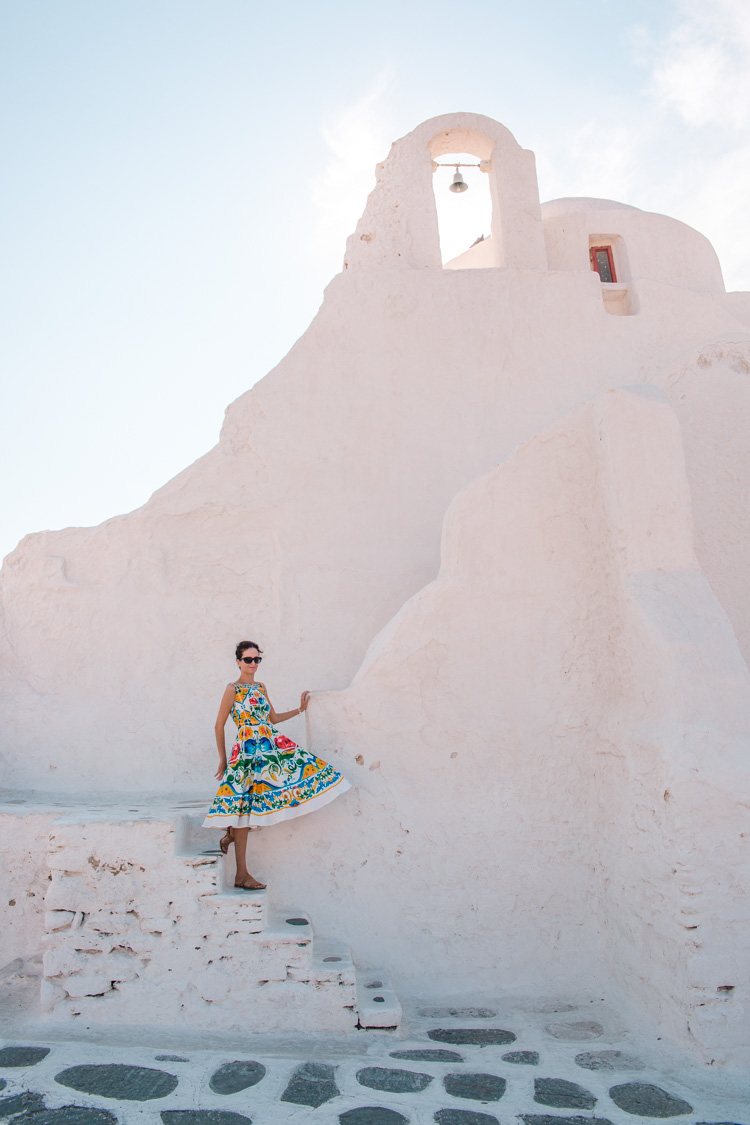 It’s a little mix of memories from the last day but also some recommendations I forgot to mention in the previous posts.

I will try to keep it short and practical this time =)

There is a huge contrast in terms of food options all around the island. You can have a flashy glamorous restaurant with overpriced food and walk 10 meters further to find the most romantic restaurant with authentic food and reasonable prices.

Some of the places I liked the most were remote location beach restaurants, so that’s not a great option if you just want to walk to your dinner and don’t worry about driving back.

In Mykonos town, there is plenty to choose from but it’s advisable to check the menu first.

Uno Con Carne – I had somehow reservations about this restaurant at it’s a sushi bar, oyster bar & steak place all in one. Kind of a weird mix of specialties and we ended up ordering none of those.

The food didn’t disappoint and I loved the open courtyard of the restaurant (on photos at the end) and friendly staff.

The interiors were beautiful and thanks to the fact it was in a secluded alley, it was very peaceful away from the crowds.

Nikos Taverna – this is probably one of the most common restaurant recommendations you see for Mykonos and it was also recommended by our airbnb host.

It was a bitter disappointment. The place was so busy and crowded it lost the whole atmosphere of sitting in a local taverna. The food was cold within two minutes of being delivered and it was less than average.

Right next to the taverna is a gelateria where they make the best ice cream on the island – including those cute ice-cream roses!

Gyros – you absolutely have to try Gyros! We had it in this tiny restaurant just on the coastline, it cost a few euros but the flavour was out of this world!

Cinemanto – we stumbled on this place just by walking around, never heard of it. It’s actually a cinema place with a huge garden shaded by trees and palm trees and one of the most peacefull places in the town.

Even though we did not have a meal, we spent quite a bit of time there, hiding away from the crowds and enjoy the company of the local cats. I popped some pictures in this post to give you an idea. Apparently, the food is pretty good too.

M-Eating – we had an absolutely spectacular dinner in here! The food was a bit on a pricey side, but the presentation and flavour were well worth it.

It’s also relatively small, so you don’t feel like you are sitting in an arena with 500 other people. Excellent service, super friendly staff and great atmosphere.

Just a note on expectations – if you write down a list of restaurants you want to try, just keep in mind that navigating through those small overcrowded streets at night it’s a bit of a mission and you might be ready to give up and settle down in the nearest place.

Budget – if you’re traveling on the budget, it’s obvious but DO check the price list and menu prices. You might get a small heart attack if you don’t.

One of the places featured in this post – those pictures at dark with that gorgeous restaurant backdrop and quirky lights with flowers – it’s called Nikkei Mykonos.

While it’s absolutely glorious to sit there, a small glass of wine will set you back 17 eur for one.  If you walk another 50 meters, you will get to that Bistro that I mentioned in previous posts where a glass of wine costs 5 eur.

Accommodation – we had initially booked a villa up the hill overlooking the harbour, but after getting a reality check about the logistics we decided it’s not going to work. With last minute cancellation and losing a bit of money, we ended up with an affordable Airbnb with two bedrooms, 100 meters from the windmills.

I believe it was one of the things that made the whole trip enjoyable. Being able to stroll down to the restaurant or bar without having to worry about parking or driving around those small roads filled with people and other cars.

It also saved a lot of time when grabbing a breakfast first thing in the morning or if you want to do nice photos from your holiday without crowds. That gets me to the next point.

Photography – as I mentioned in previous posts, the only way to get decent photos from such a crowded place like Mykonos is to do it early in the morning.

Get there just before sunrise and prepare a list of places you want to see. Instagram is a great source of inspiration and often the exact location of the photo will give you inspiration where to venture on your trip. For sunset photos, that’s a whole new level of tricky.

Most places, especially around the windmills, are super crowded and you won’t be able to get a decent picture unless you are located somewhere off the main hot spots.

Traveling with kids – my 3-year-old son was with us on this trip and he was loving the island. Having said that, if we were to travel with a baby pram, I think we would struggle. Those narrow cobbled streets are not built for prams and the crowds that fill the streets certainly don’t help.

I’ve seen lots of families with children visiting, but I think most of them were from the cruise ships parked in the harbour. If you’re coming with a small child, I think a baby carrier would make your life a whole lot easier.

Nightlife – well yeah there was nightlife and plenty of nightclubs. Did I visit any? Nope. If that’s something you are looking forward to, I think Mykonos is the place to be. Places stay open till early hours of the morning in summer.

I promised to keep it short and failed again!

Have you already visited Mykonos? What was your favorite part? Leave a comment below!