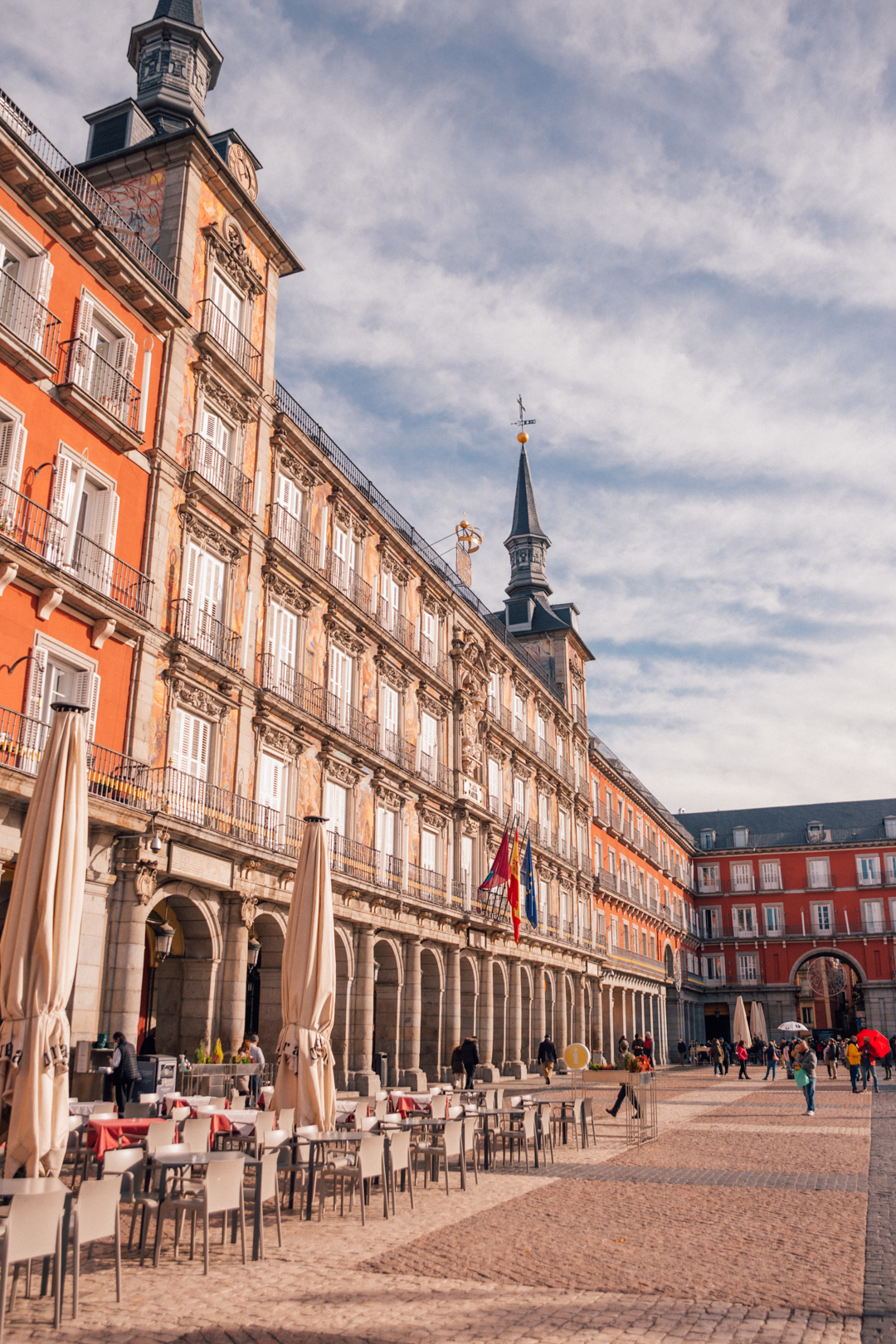 If you’re travelling to Madrid, Plaza Mayor is probably one of the top places on your must-visit list.

This expansive square in the centre of Madrid is a beautiful example of imposing architecture and vibrant street life. It’s arguably one of the prettiest plazas in Spain and one not to be missed on your trip to Madrid.

Plaza Mayor used to be the centre of the old town of Madrid. It served as an old market square and it was built between 1580 – 1619 during the reign of King Phillip III of Spain.

The square spills into the narrow old town streets through its 9 imposing gates, and lets you do a bit of time travel as you continue exploring the charming alleys and historic buildings around it.

Plaza Mayor is especially spectacular at the weekends, in the early mornings before the buzz of tourists descends on the square. Grab a seat in the restaurant, order churros and hot chocolate and watch the world go by.

Let me take you for a short winter stroll to show you around!

Back in the 15th century, the plaza was known as ‘Plaza del Arrabal’, but it has changed names several times during its history.

Since its construction, the plaza has suffered three major fires which have changed the shape of its buildings and character. Following the last one in 1790, the architect Juan de Villanueva was given the job of rebuilding it and bringing it to the shape we see today.

One of the major changes included lowering the buildings from 5 stories to only 3, and creating additional entrance gates to the plaza. The modifications continued after the architect’s death and were completed in 1854.

Today, the plaza has a rectangular shape with a size of 129 m x 94 m, making it one of the largest public spaces in Europe.

In 1848, the statue of King Phillip III was added to the square and today serves as one of its main attractions.

Plaza Mayor has been used for a variety of events, from executions to bullfights and soccer games.

Today, it is used as the place for Christmas markets in the winter and every Sunday, there is a stamp collection market held (see photos below).

What to See in Plaza Mayor

Plaza Mayor is one of those places that’s great for wandering and exploring, there are no dedicated tourists sights as such.

Start in the middle of the square with the statue of King Phillip III and make your way around the square to admire its gorgeous architecture.

The narrow old streets leading up to the plaza were some of my favourite sights in Madrid. The charming old apartment blocks, cute restaurants and boutique shops are such a contrast to the modern version of Madrid you often see in photos.

You can hire a private tour guide if you would prefer to learn more about the history of the square and its buildings.

When to Visit Plaza Mayor

The best time to see Plaza Mayor is in the early mornings.

It is one of the most visited places in the whole of Madrid, so it does get crowded during the day, especially in the summer months. The winter months tend to be quieter.

There are a lot of guided tours with big groups of people arriving here to learn about its history, so it does very busy and quite loud.

It gets also very busy in December when the Christmas markets open up in the plaza.

Where is Plaza Mayor in Madrid?

Plaza Mayor is in the centre of Madrid, as marked on the map below.

What Happened at Plaza Mayor?

Plaza Mayor used to be the old city centre of Madrid, where a lot of executions were held. Originally it served as a marketplace of the city and has suffered three major fires during its history.

Why is Plaza Mayor Important?

Plaza Mayor is one of the most important public squares in Madrid and in Spain. It dates back to the 15th century and it is an important historic space of the capital city.

How Old is Plaza Mayor in Madrid?

What is Plaza Mayor used for?

Currently, Plaza Mayor is used as the main public square of Madrid. You will find lots of restaurants and small shops operating in the square and around it. In the winter months, Christmas markets are also held in the square.

Taste of Italy in Spain: Ôven Mozarella Bar in Madrid