Cyprus is probably more known for beautiful beaches, but waterfalls also deserve a bit of credit.

A couple of weeks ago I had a few enthusiastic hike-goers staying in our place, which was the perfect excuse to do a grand tour-de-falls. I took inspiration from this blog post, but failed miserably at finding the third mentioned.

Here is a little photo recap of our short adventure.

The plan was to see Myllomeri Falls, Caledonia Falls and Chantara Falls.  All of them are a short drive away from each other and we started with the one that had the easiest access.

We took the hike route, unaware that it will take us through a steep hill and even in the shade of the vegetation, it’s quite extreme experience in the middle of the summer.

We gave up shortly after hitting the hill and returned to the car to take the lazy route via Pera Pedi. 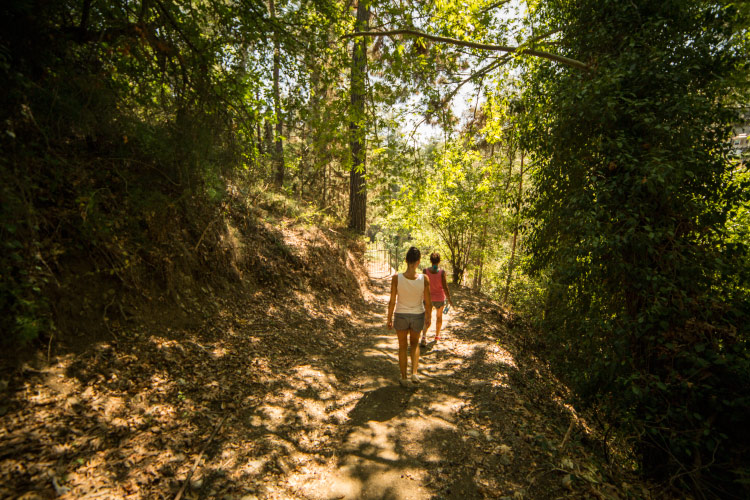 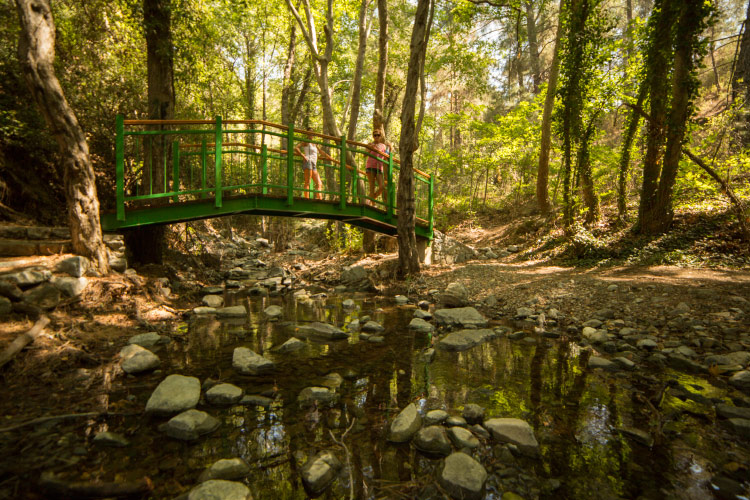 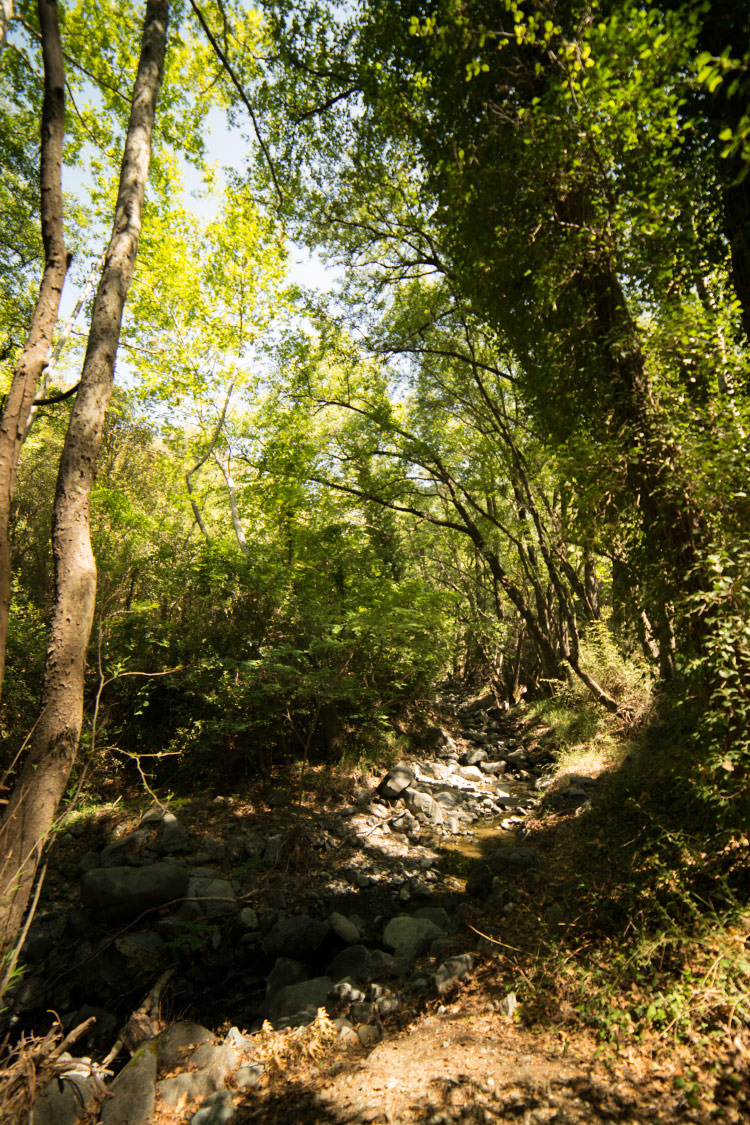 This is the access via Pera Pedi village, drive all the way to the rocks and walk through this bridge until you reach the waterfalls. So much easier and less sweating! 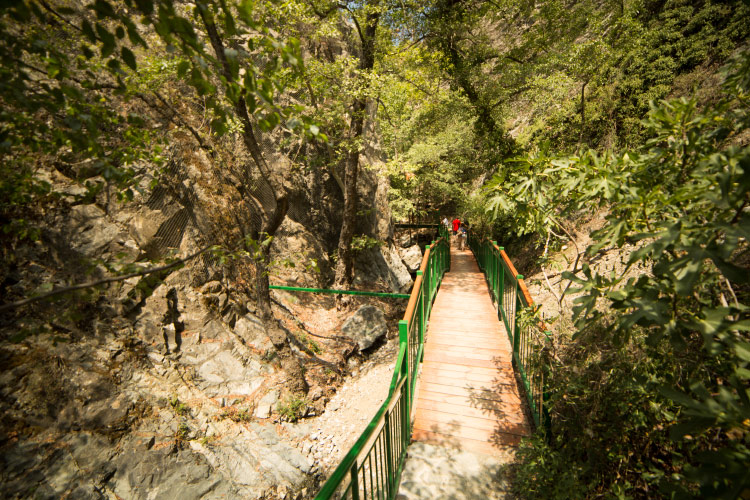 The waterfall itself was pretty impressive, it’s actually the highest waterfall in Cyprus (20 m height). 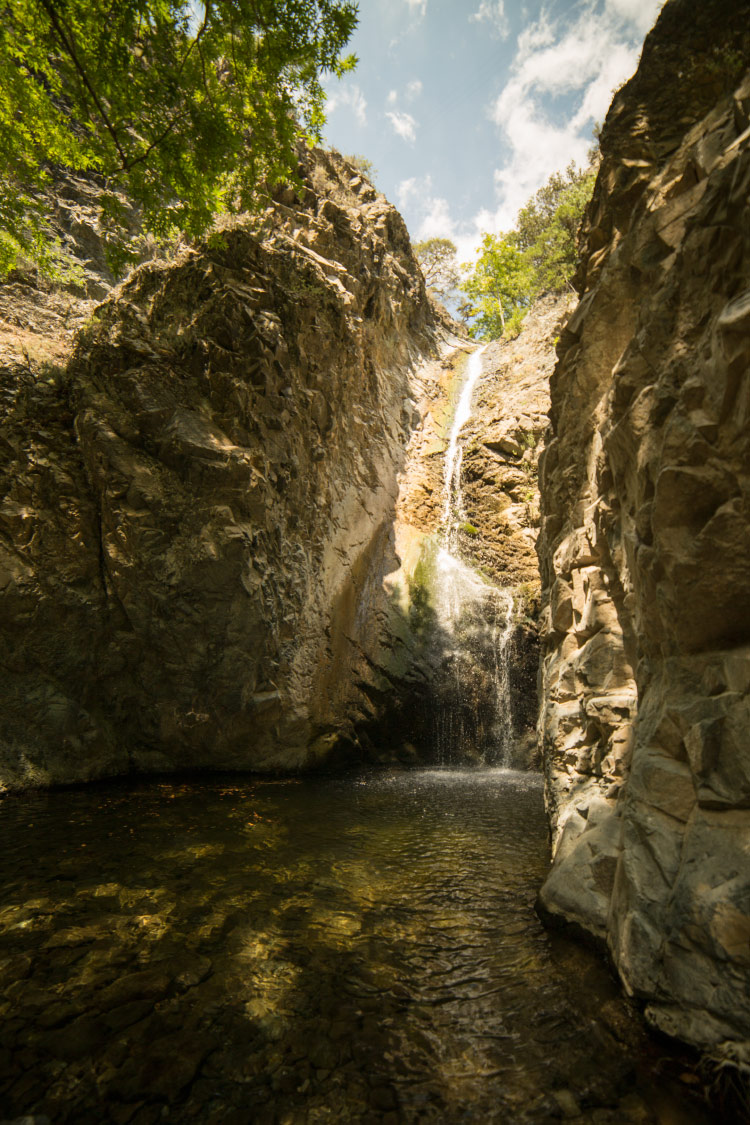 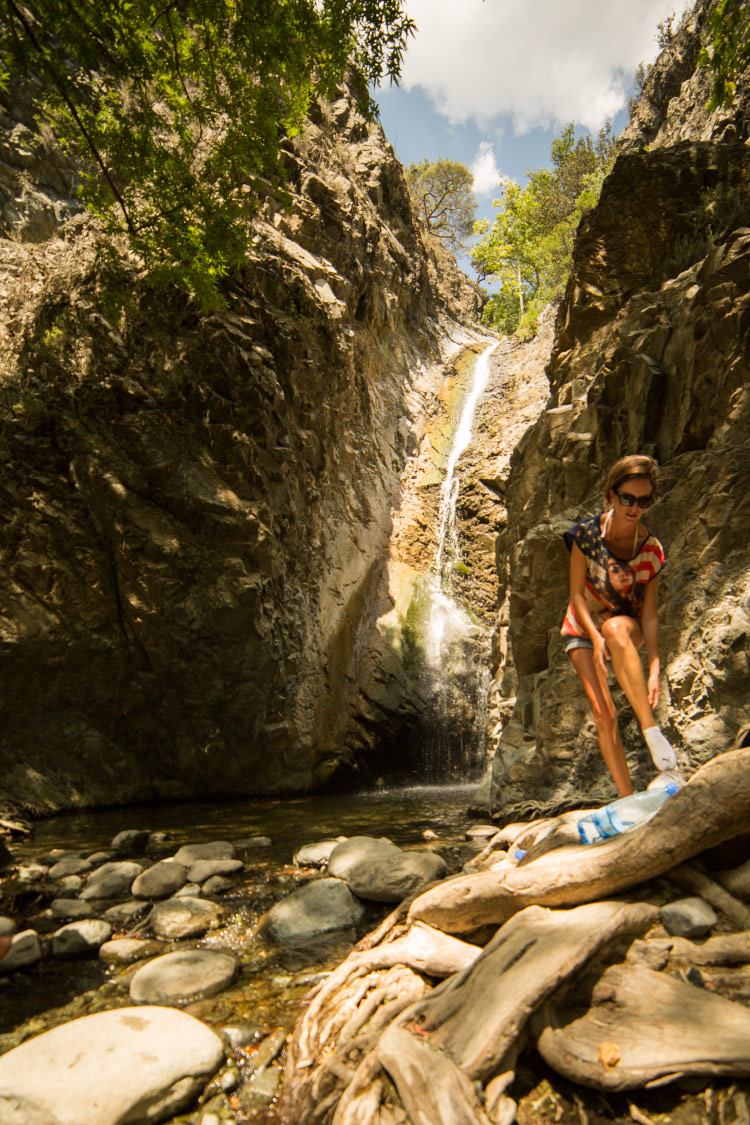 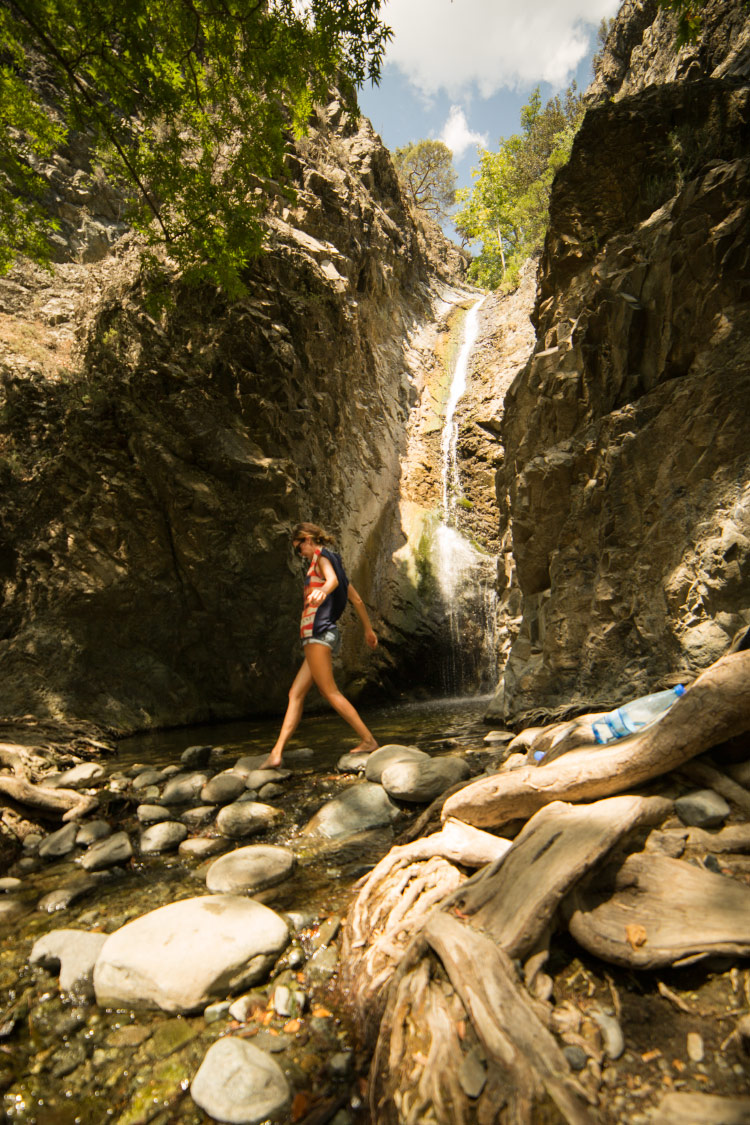 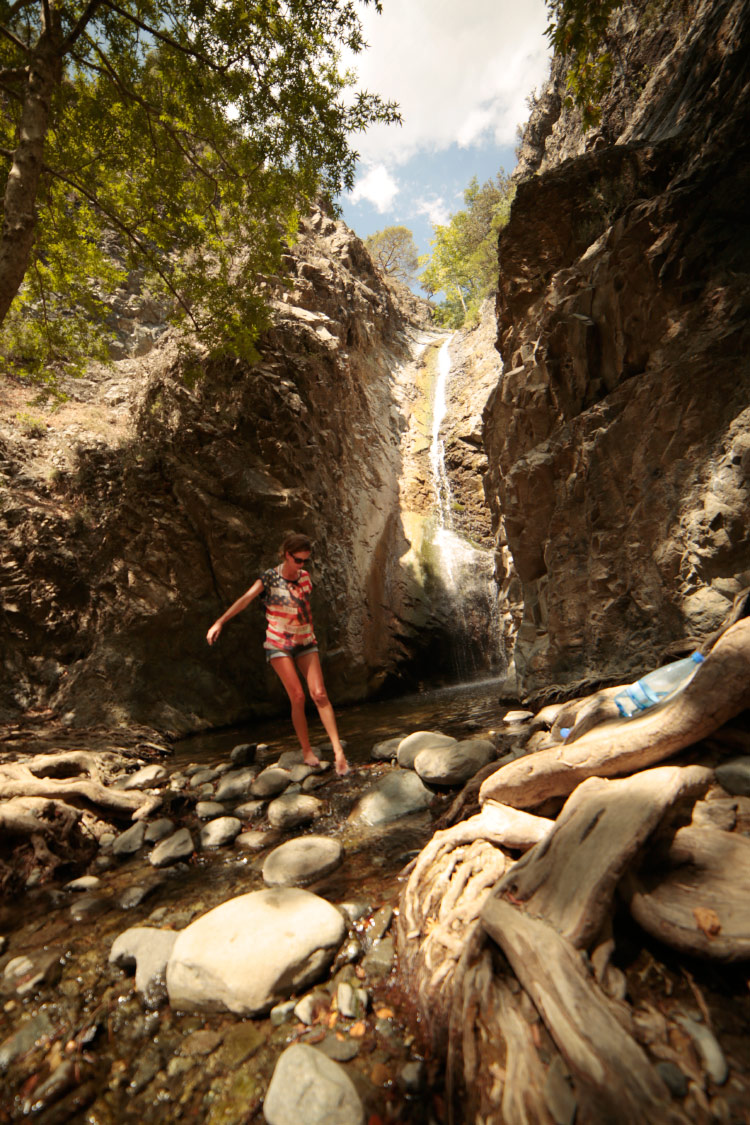 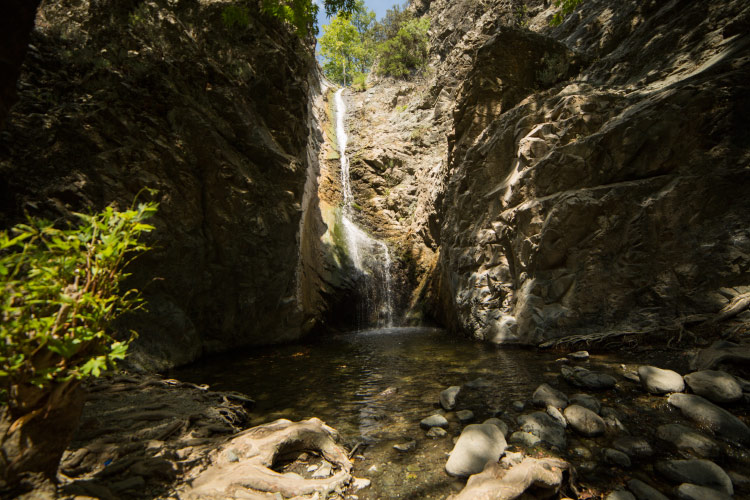 There were few tourists coming and going, but it doesn’t get overcrowded. Which can’t be said about Caledonia falls. 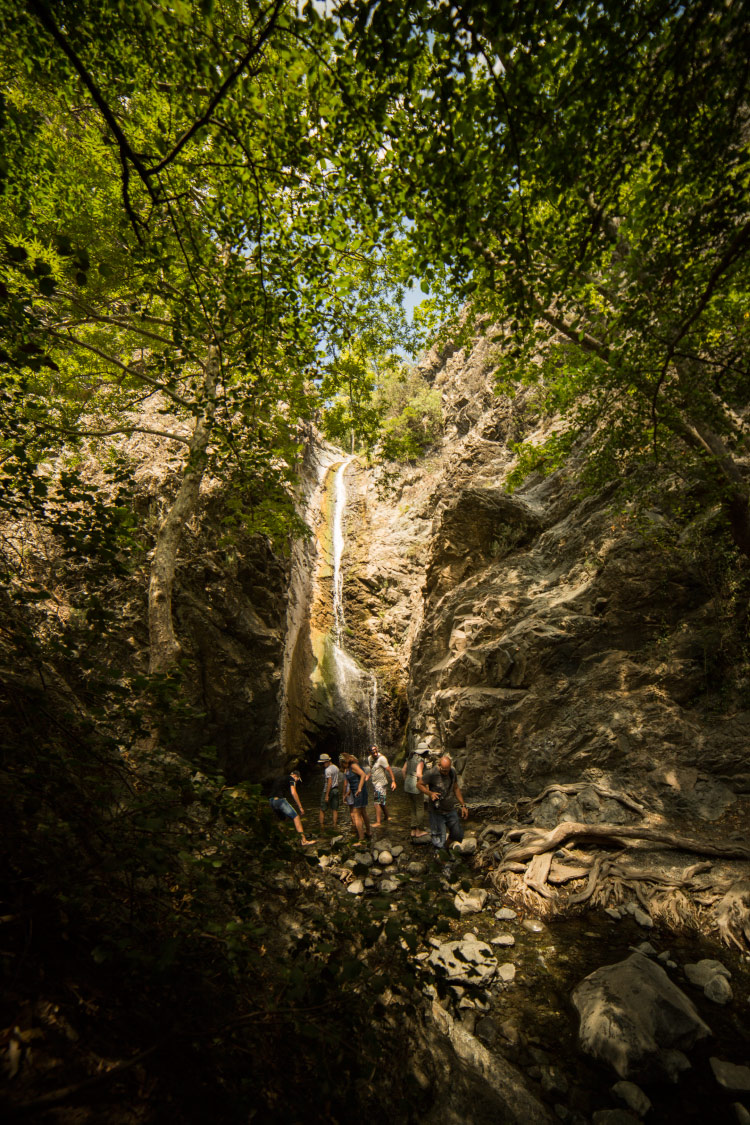 Probably the most known waterfalls on the islands, Caledonia falls can be accessed via the Caledonia nature trail, which starts at Psilon Dentron near Platres or Kryos Potamos river near Troodos Presidential residence. 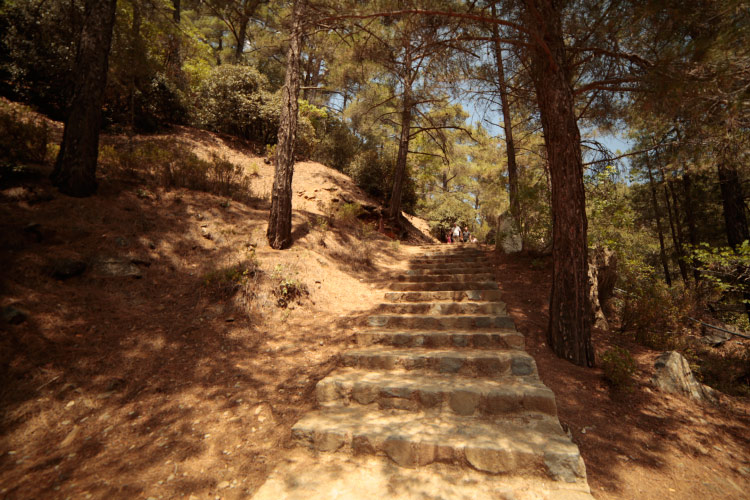 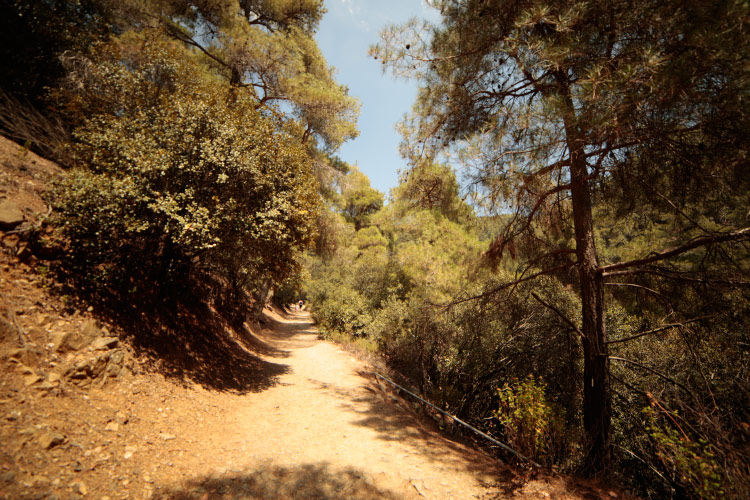 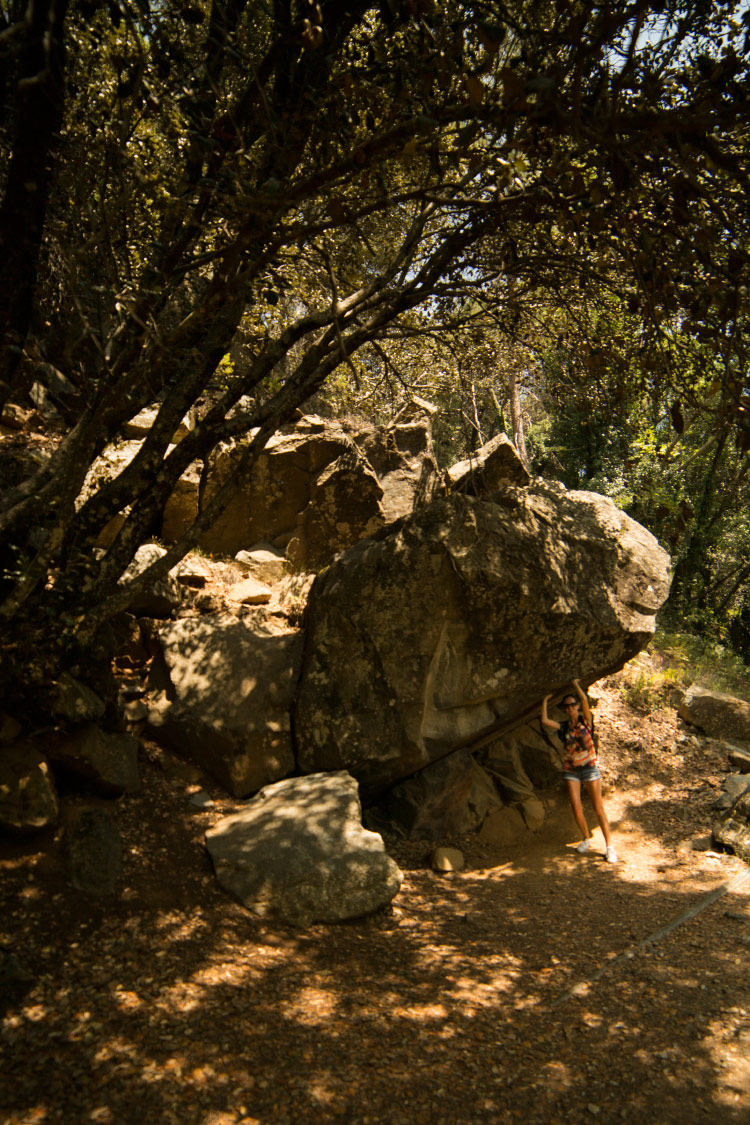 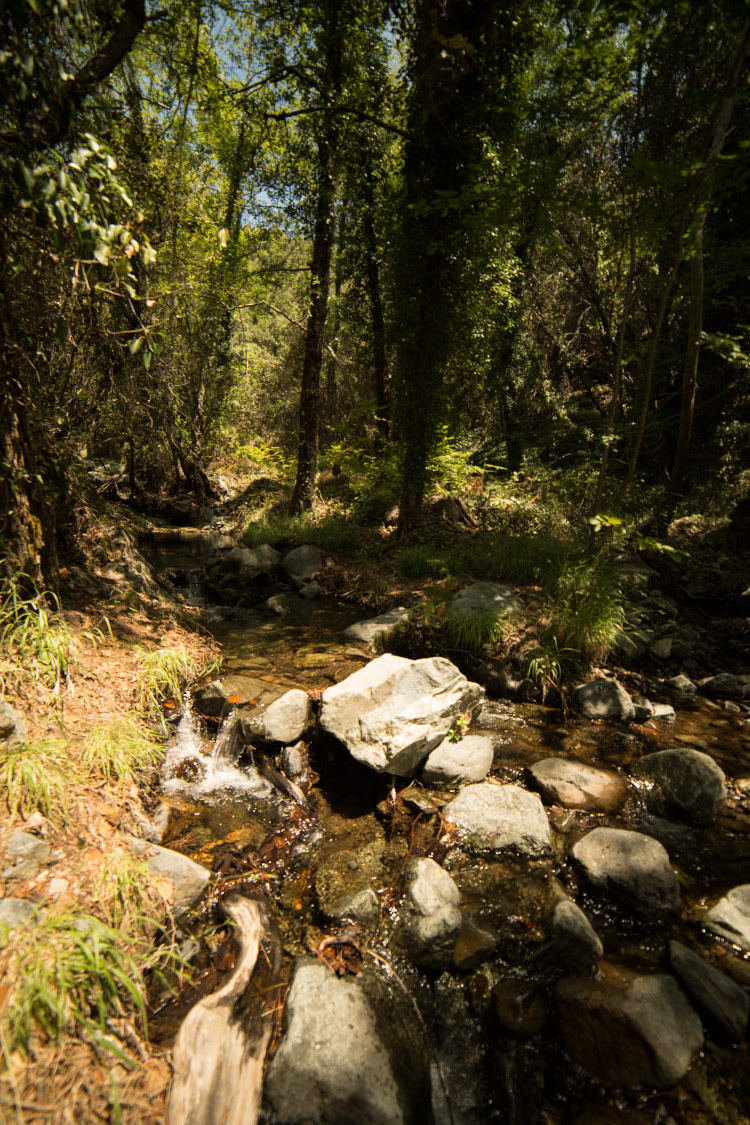 There are plenty of spaces to sit and relax, freshen up in the ice cold water and perhaps have a little picnic mid-hike. 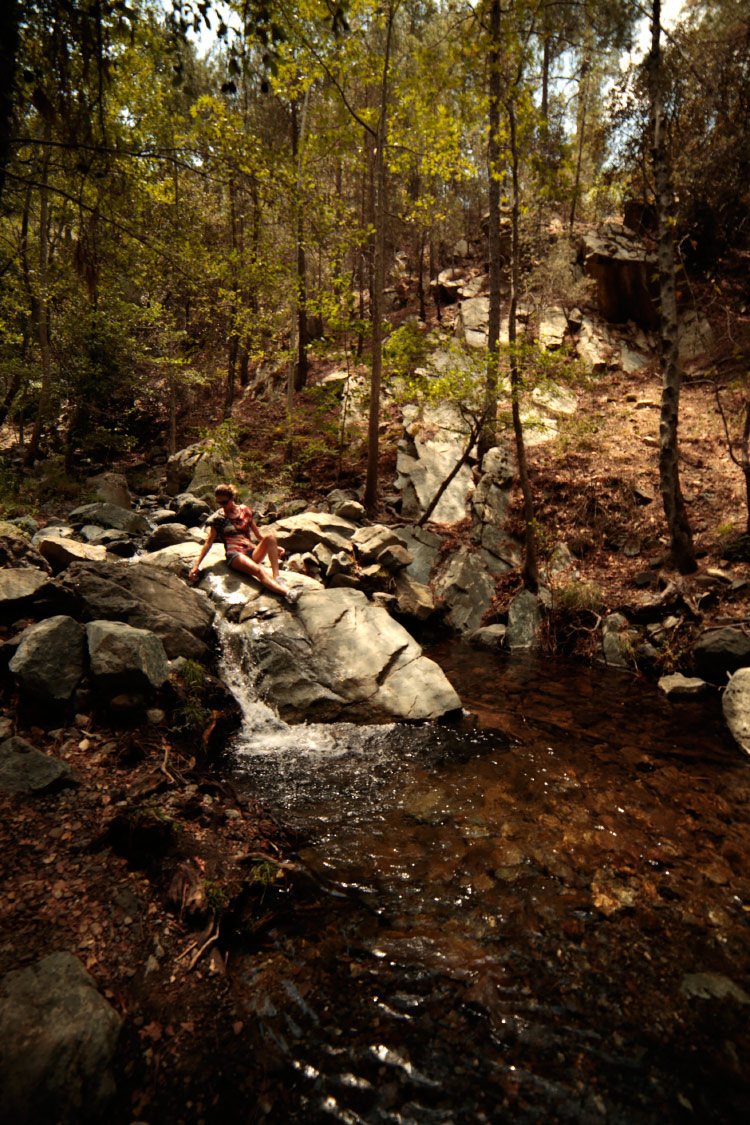 As we arrived at the waterfalls, there were groups of tourists huddled around, taking pictures, having their packed lunch and competing who will get the waterfalls from the best angle. Not the most peaceful nature spot, if you ask me.  If you want to visit, try during the week and definitely not on Sunday (I won’t be making that mistake twice!). 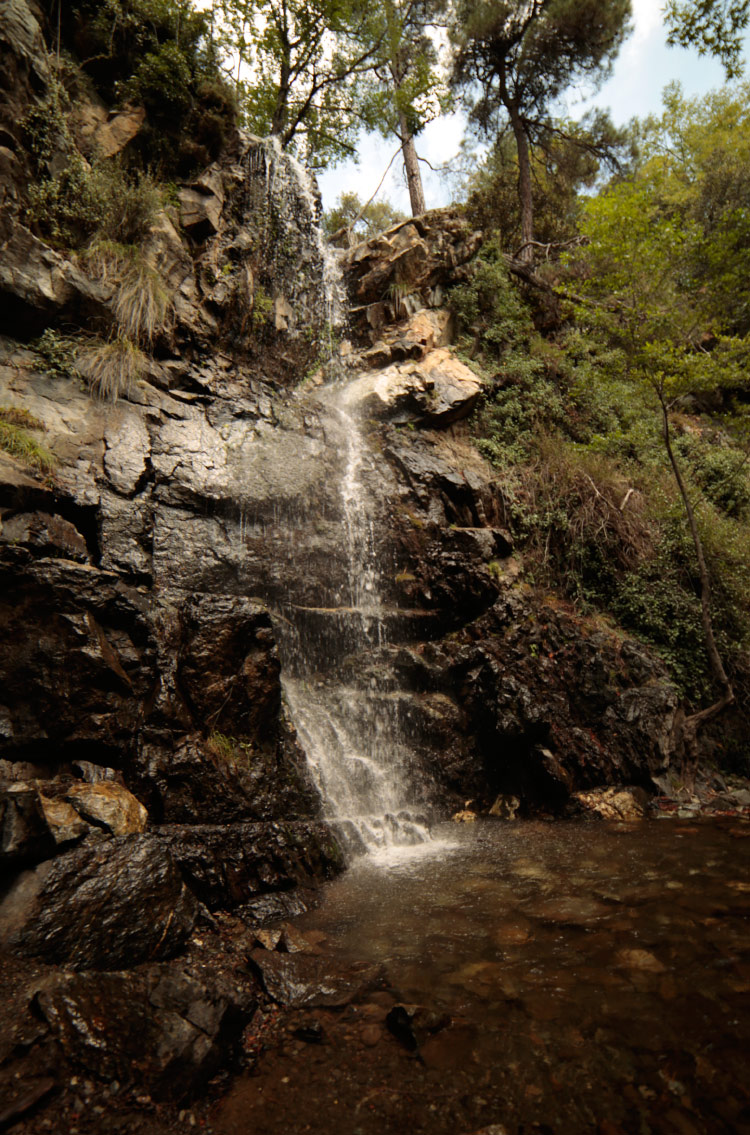 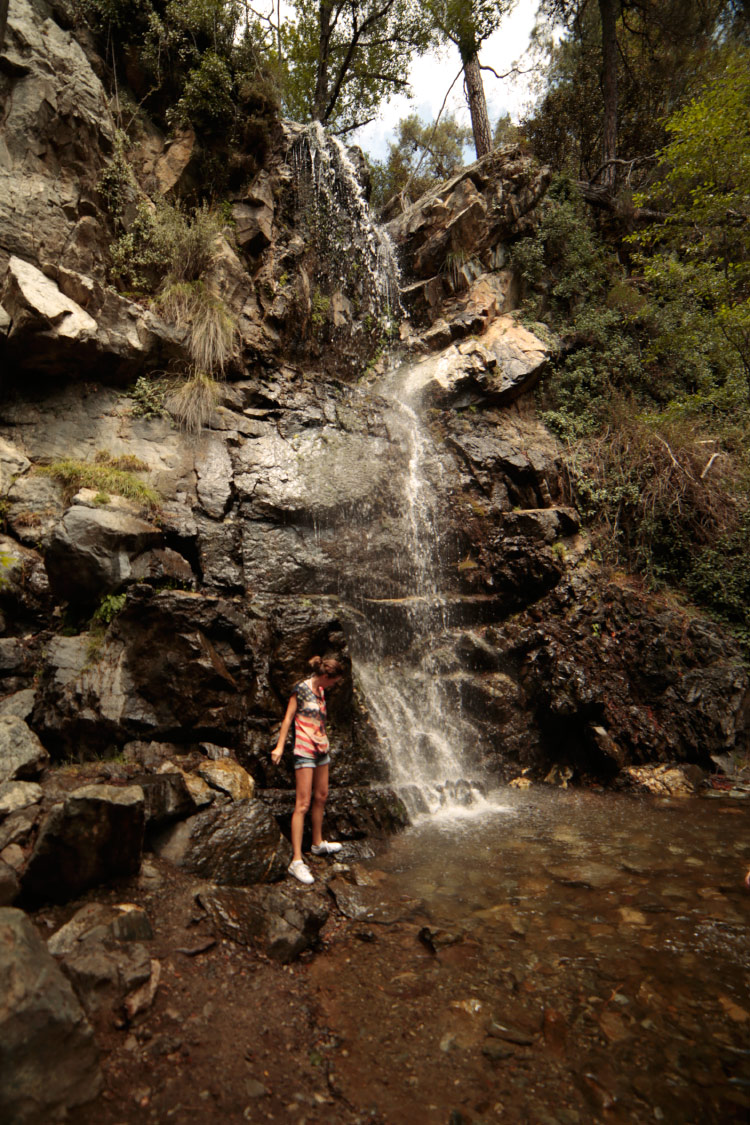 Lots of people were gathering around the waterfalls very quickly, it felt a bit overcrowded. 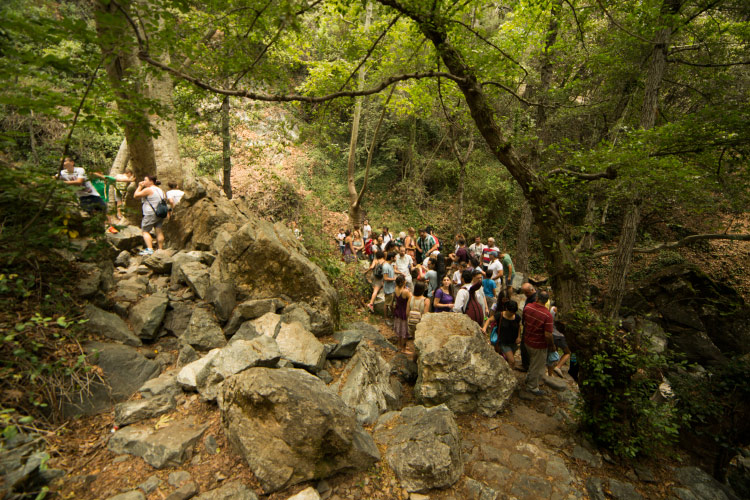 The last waterfall we didn’t make it to was Chantara falls. We tried to get there from the Trooditissa monastery, which is supposed to be 3.5 km dirt road, but there were no signs or indication which one of those roads would lead to the falls. Alternative access to the waterfalls is from Fini village, which is 1.5 km road or from the village Pano Platre (5.5 km normal and dirt road).

If you’re planning your own Tour de Falls, I would suggest starting with Caledonia Waterfalls in the morning before it gets busy, after that Myllomeri Falls and Chantara Falls.

Don’t forget to enjoy the stunning views as you driver around the mountains! 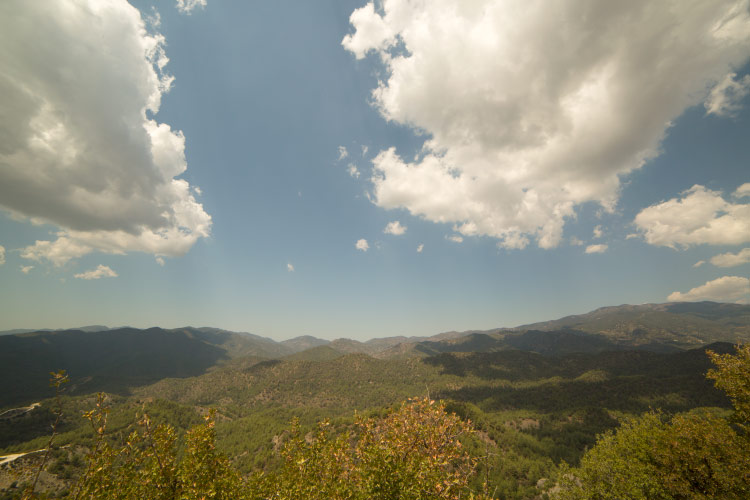 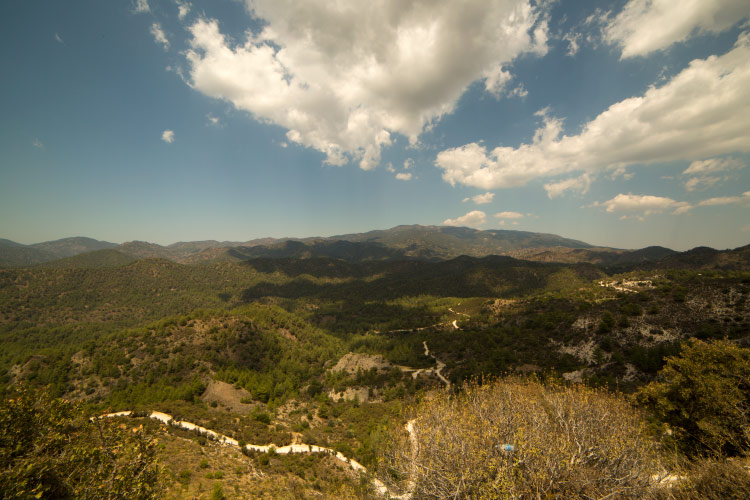 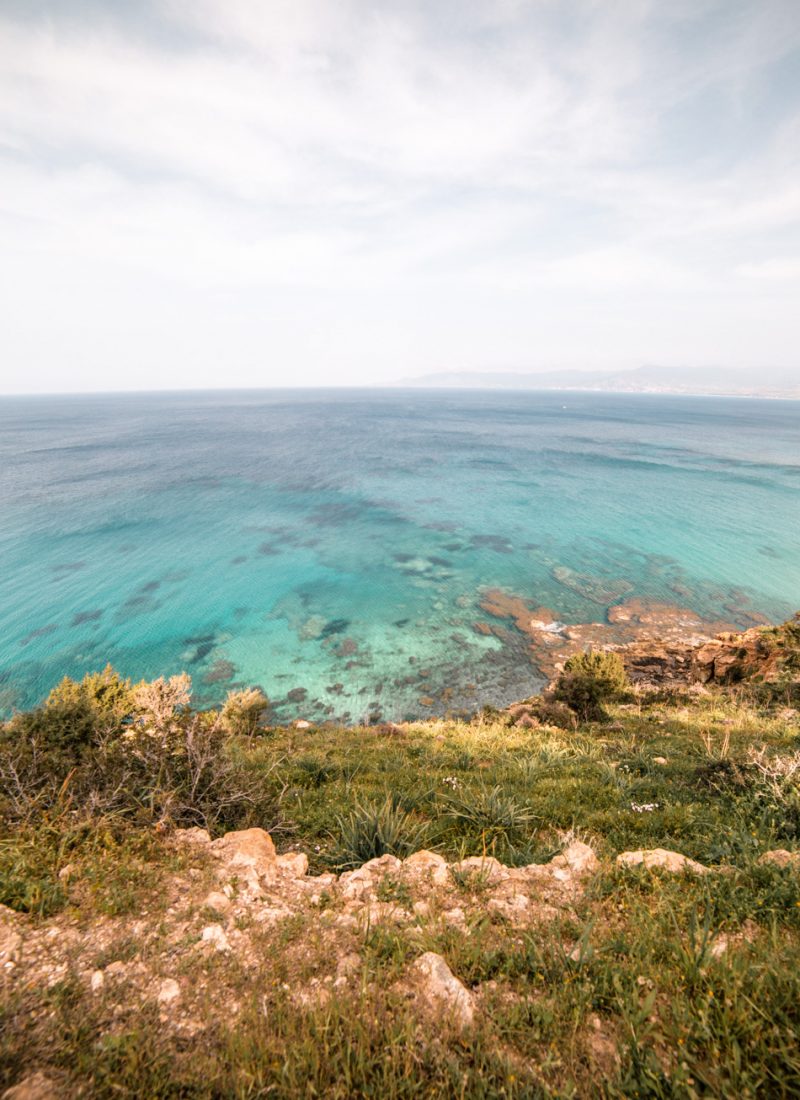 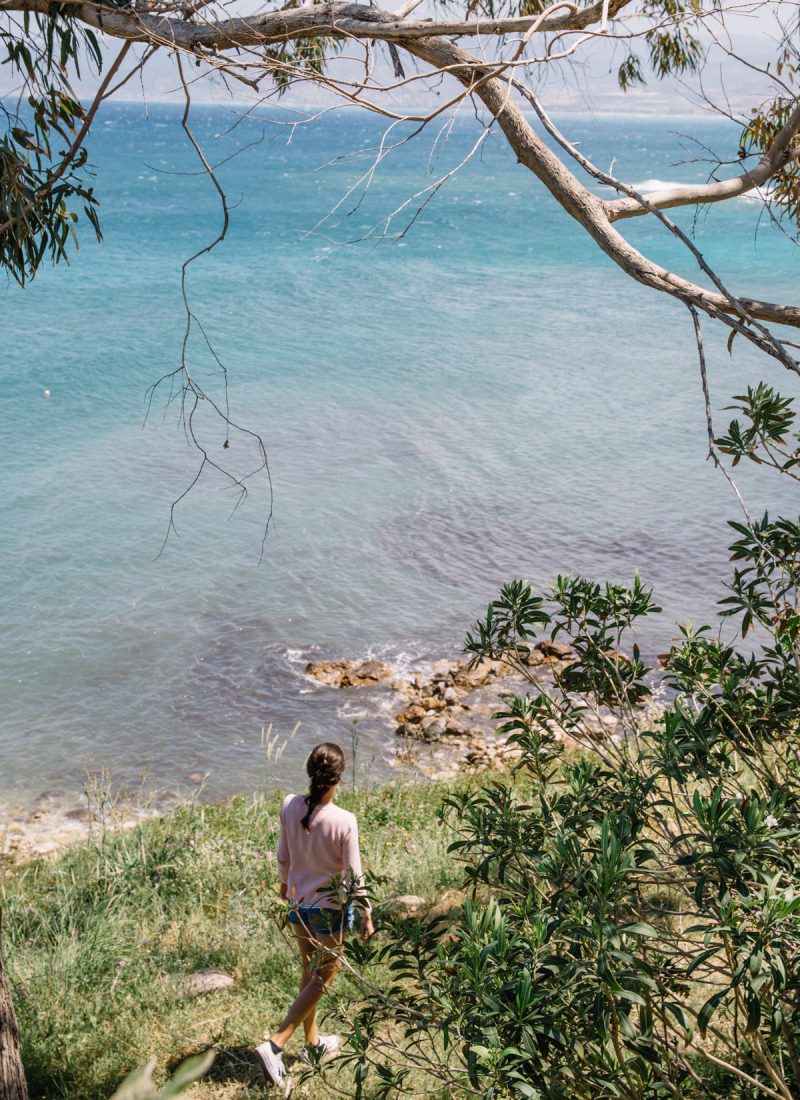 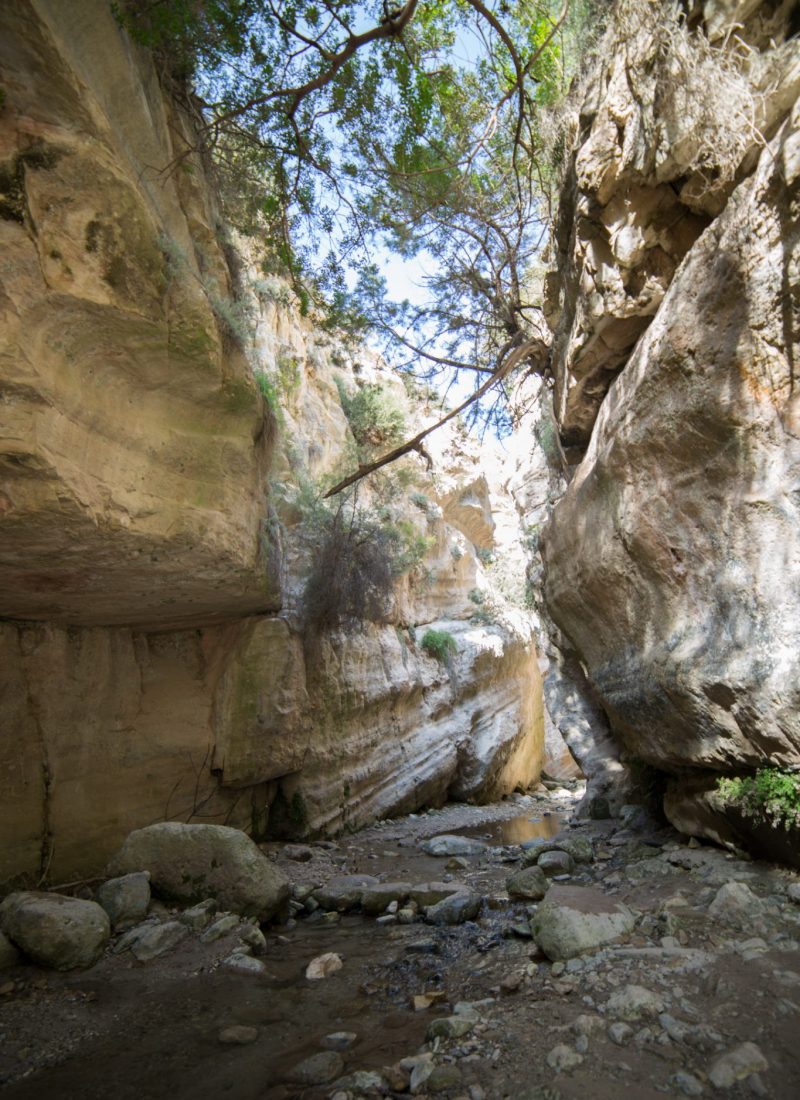 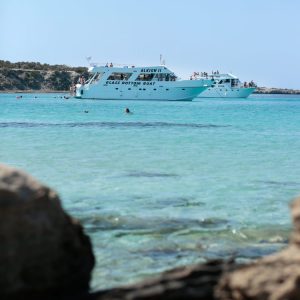 Emerging from the darkness 🌗⁣ .⁣ I don't kn

My trip to Ronda in July was one of the highlights

My trip in Cordoba was a proper farewell to the su

Landscaping goals for my future home (taking a lit

Stepping into the weekend 😉⁣ What are your pl

With my partner in crime, sitting under the Balcon

“There's a sunrise and a sunset every single day