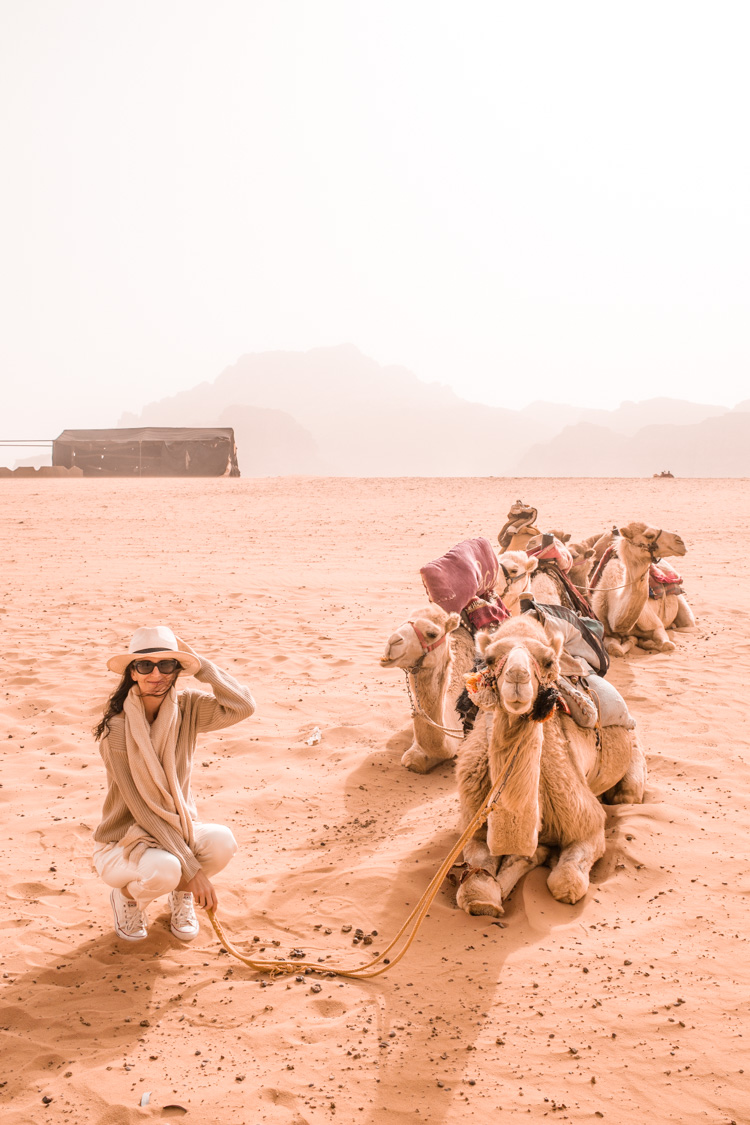 Here comes the first fun part of my trip to Jordan.

After the first night by the Dead Sea, it was time to pack the bags, wipe off the tears and head down towards Wadi Rum desert.

The journey took a staggering 4 hours in a taxi (more on that in a separate post), including a short break at a local coffee shop where I enjoyed long stares of the local kids and adults alike. If you ever want to feel like a celebrity, a visit of a local village in Jordan comes highly recommended.

…. until we finally made it to the desert area. I booked an accommodation in a local camp run by Beduins, one of many dozens of similar camps in the area.

The booking confirmation only stated their number and no instructions so I got the hotel receptionist find out details.

What I was hoping for is to see a guy called Jamal waving at us friendly from the visitor center as we arrive.

Well, I was in for a treat.

As we closed to the entrance to the visitor center, I saw a guy in traditional white outfit waiting at the gas station next to something you can describe as a car wreck.

I remember thinking to myself: “God, please let that not be Jamal! “

Luckily we passed him and headed straight to the visitor centre. I sank deeper into my seat from relief, until our driver got another call from Jamal and stopped in a few meters.

You wouldn’t believe it, but that car wreck actually chased after us and it was Jamal himself driving.

Me and my husband exchanged glances, smiled politely and shook hands with Jamal who shouted: “Welcome to Jordan” as he shoved our suitcases on the back seat covered with paint, sand and with flies buzzing about.

As I took my seat and opened the door, a bunch of flies came straight to my face. I told myself that I hope nobody died in here and that I should stop watching those stupid crime dramas. To my surprise, the car moved and we were on our way to the camp.

Now I got a chance to look around properly.  I found the whole thing hilarious and was giggling by myself in the back seat, while my husband had a chat with Jamal, which went as follows:

husband: I think your front window is a bit damaged?  (referring to the completely smashed front window where you can barely see anything)

Jamal: that’s just because it was sandstorm yesterday, I need to wash it.

All of the doors were missing the inner lining, both mirrors smashed, half of the car in the back was missing. There was a few kilos of sand in the front seats and as you drive you can wave hello to scorpions you can see through the hole in the ground (where the clutch usually is).

Let’s just say the car has seen better days and the short journey to the camp in this precious vintage model was one of the most hilarious experiences of the whole trip.

The camp looked exactly like on the pictures. As one of the very few camps in the desert, it had private bathrooms and toilets, which is a true luxury.

The main building served as a hotel lobby, restaurant and reception same time. We were warmly welcomed and offer really nice traditional tea, before unpacking and arranging the details of our desert trip with their jeeps.

After we unpacked, sand and wind-proofed ourselves, we were handed over to our two drivers who we shared with another couple.

Unfortunately, we were not very lucky with the weather and where you would normally see the blue sky was just a cloud of dust.

That didn’t stop us from getting excited, especially after we saw the comfortable seating arrangements at the back fo the Jeep.

Have you ever sat on a washing machine when it’s doing it’s spinning cycle? Well that’s pretty much describes our drive.

Luckily the views made up for the bumpy ride. I started grinning ear from ear but after half a kilo sand in my face I realised that’s a high price to pay for a photo. 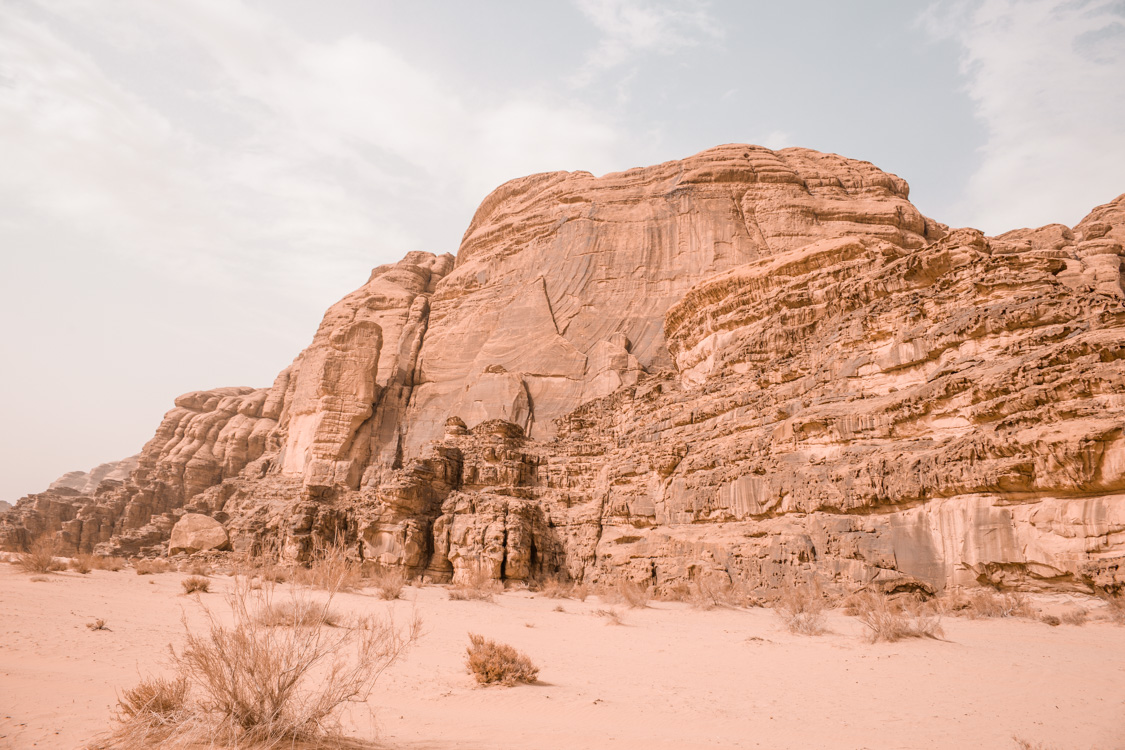 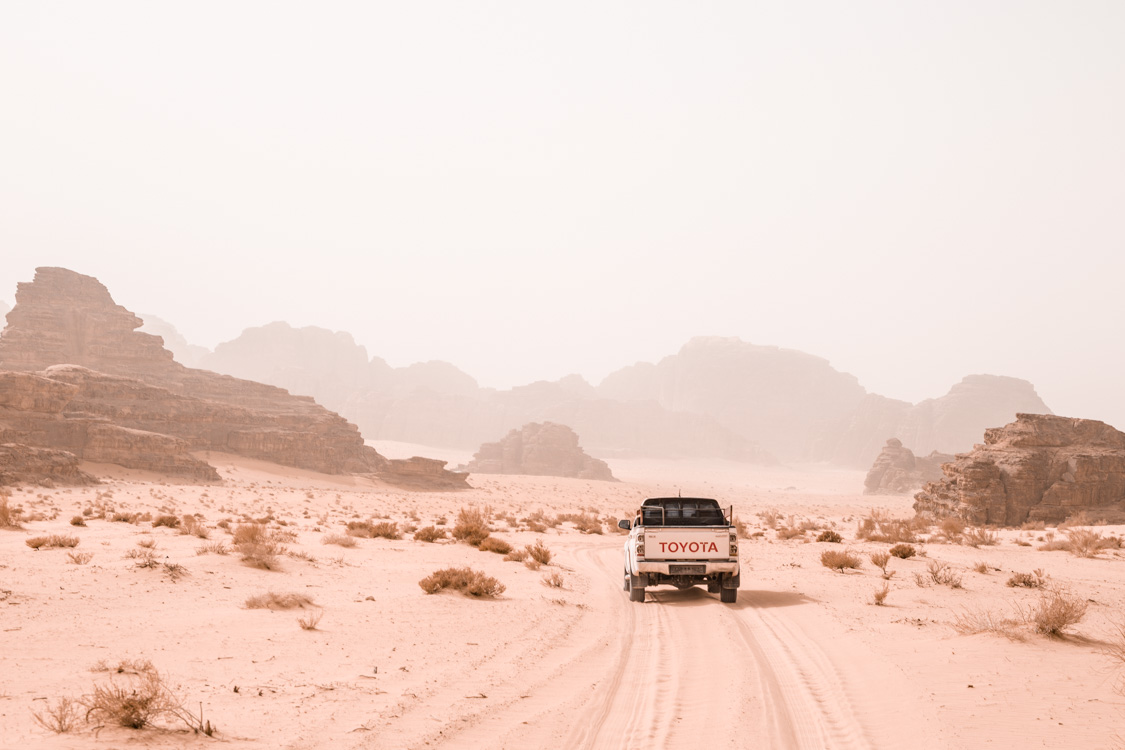 The scene in front of us started unfolding and it revealed a landscape that can be only described as Mars. Dramatic tall mountains of rocks washed by strong winds and sand were creating a view fit for a movie scene.

Our tour guides stopped after a view sand dunes to take group pictures and happily forced us to pose against each rock or piece of a plant we would find.

We were traveling with two cars, which was a blessing because our older model broke down twice or three times and failed to start. After a few loud exchanges in Arabic, our two guides who seemed to have possessed all the Chuck Norris survival skills, successfully resuscitated the truck and the spinning cycle was rolling again.

The car was so small inside that when we got in we felt like trolls in a country of fairies. We were generously offered the front seat for photographs and they guys happily shared a photo with me too.

One of my friends commented that our Jordanian guides look a lot slimmer than I do, but I had to note that they were wearing a lot more slimming outfit cut than I did.

Those of you who follow me on social media have already met Zelda (pictured below).

We met her on our way and introduced ourselves formally. Zelda is the team leader at Wadi Rum and likes to boss around the girls.

She loves a good tan and thanks to her mile-long eyelashes she is breaking hearts all over the desert.

During one of our stops in the desert, one of our guides showed us how to keep clean in the harsh desert condition.

All you need is water and this peculiar plant. Your crush the plant with rocks, rub it between your hands and voila! Your very own desert soap!

I won’t tell you how to survive a scorpion bite or avoid snakes visiting your tent, but now you know how to keep your hands clean. Essential for survival in the desert.

After a while of driving, and 280 pictures later, we arrived at a Beduin tent in a massive gorge. As we approached we finally realised why we are there – the massive rock by the entrance held the picture of Lawrence of Arabia.

There are whole dedicated tours that will take you in the footsteps of Lawrence of Arabia and explain in details the history and his travels.

While the history is fascinating, I was pretty happy taking one picture of Mr Lawrence the greatest and head back to explore the gorge and settle in for some tea with Beduins.

As we sipped on our tea, more and more groups arrived and all of a sudden it felt very crowded.
Our guides ordered us to climb the massive sand dune opposite the camp to get a better view and more pictures. Damn they were right!

We spent the rest of the day happily sitting on sand and enjoying watching the desert highway traffic.

As the day neared to the end, we moved to a different spot to watch the sunset. As we got into the open space, you can really feel the power of the desert. The wind got really strong and created little wave shapes on the sand. It was hard finding a place to sit still without being battered by the wind.

If you haven’t had enough of sand and stone yet, you can tune in this weekend for second part of the desert adventures where I share the sunset pictures and give you more details about what it’s like to spend a night in here, complete with desert BBQ.

For now, let’s close this epic sandventure with a quote from Mr Lawrence himself, which I think really speaks volumes about how I feel about this place:

“No man can live this life and emerge unchanged. He will carry.. the imprint of the desert… and he will have within him the yearning to return…. For this cruel land can cast a spell which no temperate clime can match.”