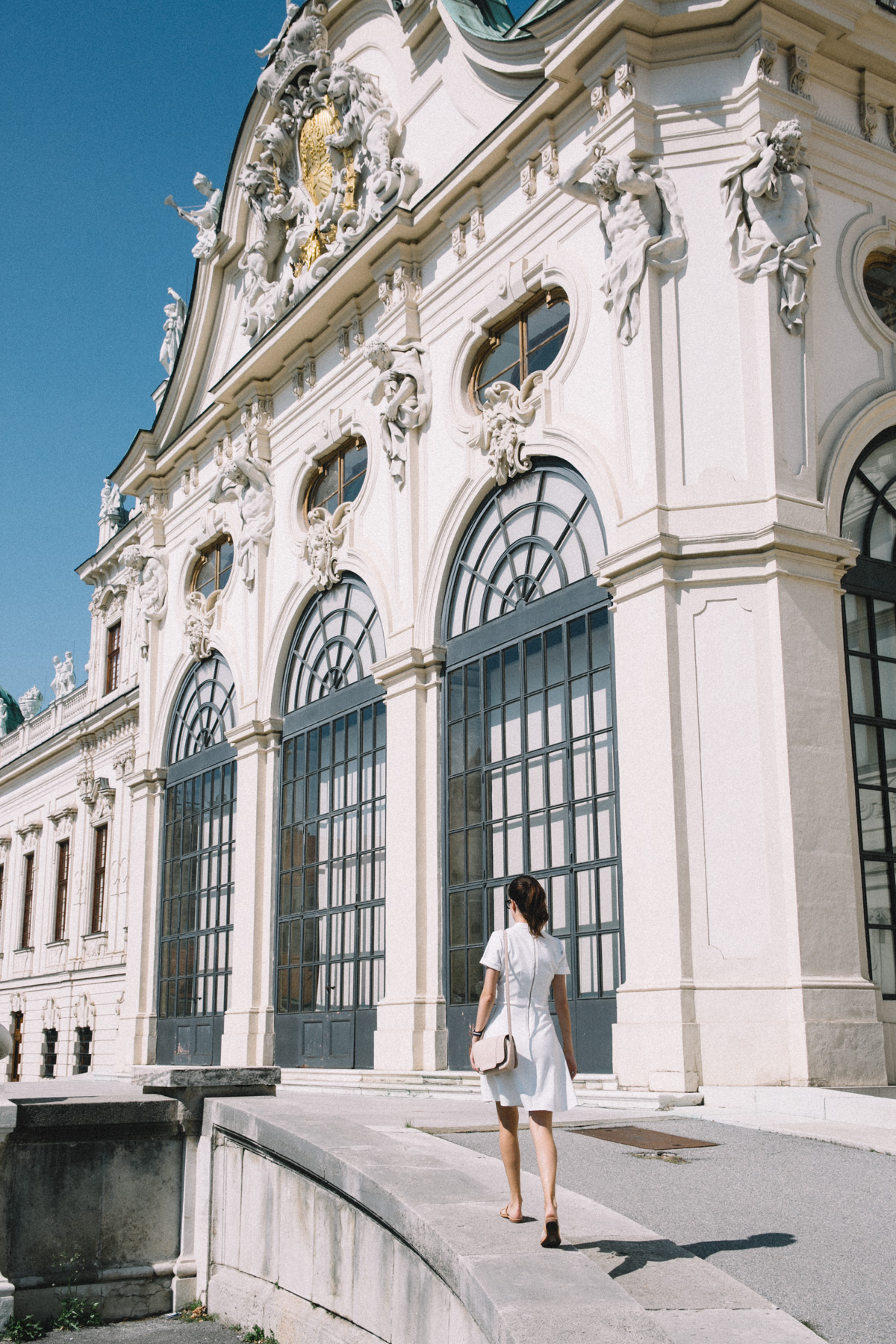 Have you been to Vienna already?

The chances are you were probably at the airport at some point while traveling! Vienna is one of the busiest travel hubs in central Europe and for a long time I was successfully avoiding seeing the city itself.

Despite living in Slovakia for many years and being literally 1.5 hours away, I never stayed overnight.

I don’t know if it’s because it was too easy or not exotic enough, but I now made up for it.

Vienna was the starting point of my trip to Italy, which was a birthday surprise for my husband. We were taking an overnight train and when I found out there will be a bank holiday on the same weekend, I thought it would be the perfect excuse to start the holiday with a mini-break in Vienna.

We checked in our hotel early afternoon, after arriving with a bus from Bratislava.

On our first day, we’ve just been sorting out issues with the hotel room and only popped out for a late dinner in a nearby Irish pub, nothing fancy. It ended up being a bit of a trip down memory lane as it brought back a lot of memories from our time back in London.

The next day, we left the luggage in the hotel and headed out to explore the palaces and grand buildings.

Starting with the most famous one of all, St Stephan’s Cathedral (locally known as Stephansdom).

I remember visiting the church and square when I was in high school and remember how impressive it was.

Unfortunately, during our visit, there were ongoing constructions works on the cathedral and a lot of the beautiful facade was covered while being repaired.

The cathedral is probably the most famous landmark of the city and was built in 12th century on a site of ancient cemetery.

You can take the guided tour to learn about all the details of the architecture, history, famous catacombs, crypts and organ.  The most known feature of the cathedral is probably the mosaic tile roof, which has been renovated after it started turning dark. We skipped the long queue and instead did a short tour ourselves, stopping along to admire the different details and sculptures.

The cathedral has seen a fair share of famous weddings, including those of royalty and musicians like Mozart. It was also a funeral place of many important figures in history, both local but also international.

The sheer size of the cathedral and all the details are breathtaking.

Today, it is the seat of the Archbishop of Vienna and you can enjoy the cathedral at it’s best if you attend one of the organ concert held here regularly. There will be people outside the gate with leaflets, so you will have plenty of opportunities to choose one.

For us it was time to move further down the road and head towards Belvedere Palace and Gardens.

We ended up walking around the whole garden from the outside wall, not knowing that there is also an entrance at the bottom of the garden. Tourists, what can I say.

There are a few exhibitions to choose from, if you want to cool off inside the palace and see for example the work of Gustav Klimt.

You can also buy tickets to the exhibitions and palace tours online, saving a bit of time and money.

I prefer to admire the works of mother nature on fresh air, so we ventured to the gardens, right after a quick stop-over in the cafe for a big chunk of sacher torte with cold coffee.

The gardens are what you imagine movie gardens to be.

Immaculately maintained, with a few water features and plenty of angelic looking statutes around.

We took a quick stroll in the scorching heat, trying to get the whole palace into the frame while navigating between crowds of tourists.

After a beautiful afternoon surrounded by greenery and royalty, it was time to wave goodbye.

… and the kind lady indicated our direction.

Off to Prater amusement park.

If you want to feel like a kid for a day – or to challenge your comfort zone – this place should definitely go on your list.

In a short taxi drive, you are transported to a different world filled with screaming people, noisy music and a maze of kids running around in sugar rush.

The place is so big we had to look at the map where we actually want to go.

Right by the entrance is Madam Taussaud’s museum, in case you’ve never been in one and want a pictures with a few celebrities.

There is also the famous Wiener Riesenvad and the Ferris Wheel.

It’s a crazy place and if you can bear all the noises and screaming kids, it’s actually a lot of fun.

And for those who happen to carry around a pair of diapers, they can also go on something like this….

If you can’t tell from the pictures, that’s pretty damn high up.

Knowing my fear of heights, I knew I’m not going anywhere near that thing.

In the true spirit of adventure, we opted for a pint of Austrian beer and with disbelief in face watched people scream their lungs out in that horror show while we sipped our beer.

I haven’t gone on a single ride and I’m not ashamed to admit it.

Could be a sign of getting closer to retirement age.

In the middle of all the chaos, we found a place that looked like mini October-fest village.

Complete with huuuge pints of beer being carried around. Not even talking about those giant chunks of meat.

Maybe it was a mini medieval festival. We didn’t find out because there wasn’t a single place available to sit.

After our mini adrenaline adventure in an amusement park, which consisted of drinking and eating, it was time to return to central Vienna.

We had a train to catch.

Just before we headed out to the station, we had one last stop at a cafe near our hotel, where we had breakfast the same morning.

It is one of the oldest cafes on the street, with traditional old-fashioned features that make you feel like you’ve just been sitting in a time-machine.

The cafe says that the ‘people in the coffeehouse are emigrants, who come there to exile from everyday life.’

As we arrived, there was a live piano and violin music and the place was filling up with locals.

We finished our last drinks in Vienna, took a few glances around the streets and headed out to the hotel to pick up our luggage.

With feet tired from walking and head full of experiences, we got ourselves on a train headed towards Italy.

But more on that next time.