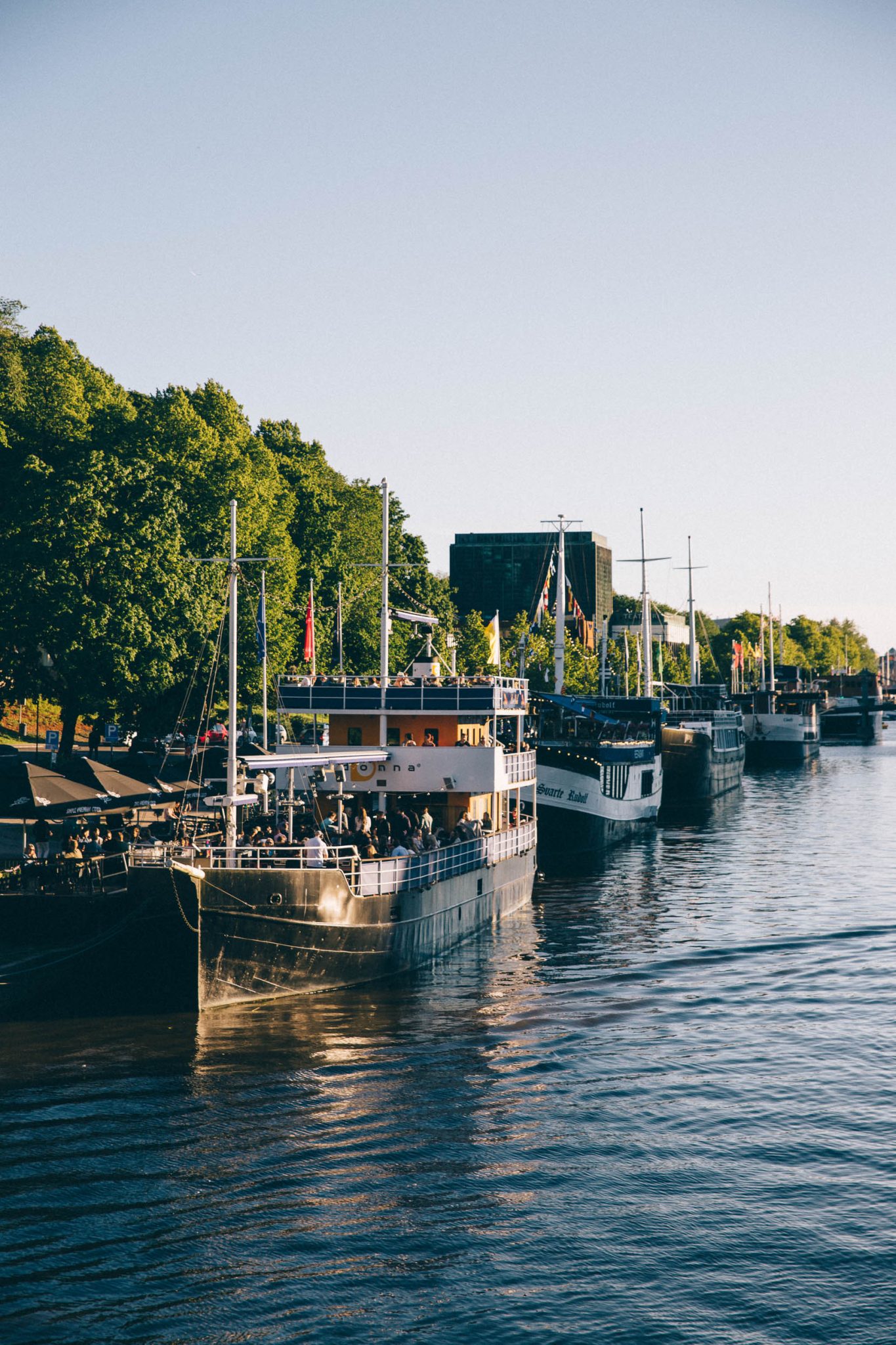 Fancy a little spin around Turku?

You came to the right place.

I will leave out the introduction about Turku for another time and glide straight into the important bit – food and drinks!

On a whim, we decided to go for a night out on a Wednesday, starting at the river and moving towards the city centre.

Summer in Turku is at its best by the river. The boats parked along the banks give you plenty of options for refreshments while enjoy the rare warm and sunny day in Finland. People gather to sit by the river banks and enjoy a glass of wine, or two. All the buzz is concentrated around the boats, with everyone trying to find the last sunny spot on the deck.

If you’re lucky with timing, you can even catch a moving bar on a boat that roams up and down the Aura river.  We settled for one of the few remaining spots on Svarte Rudolf, best choice for food by the river (another great option is Cindy boat – I’ve been told even the president had a meal there).

If you have a bit of time before dinner, there is a great museum / gallery right by the river – Aboa Vetus & Ars Nova (Museum of History and Contemporary Art).

If you don’t fancy educating yourself, the pink wall by the museum makes a great background for instagram photos.

Even though it’s the middle of summer, the evenings in Finland are quite chilly.

Each of the boats offers free blankets and heaters for all the decks, so you never find yourself freezing up. If that doesn’t help, there is always alcohol to warm you up. My preferred method too.

We started on a sophisticated note with white wine, but later moved to Long Drink (known by locals as Lonkero), my beverage of choice anytime I’m in Finland. It was created for the Helsinki 1952 Olympics and became so popular it’s still sold today.

After our first round on the boat, we crossed the river to head to the city centre.

We relocated to Hunter’s Inn, an old gem in Turku town.

Operating since 1988, it was the first beer restaurant in Finland and even today, offers an impressive selection of beers and ales.

The interior is pretty much like an old English pub, while the outside terrace looks much more hipster friendly with quirky lightning and decorations.

That’s where my Lonkero was waiting too.

For true gin connoisseurs, you should buy this in a can, not from a tap in a bar. Best served chilled after a hot sauna session.

Our last stop was Teerenpeli, just across from the main market square in Turku.

It’s not your average restaurant or bar – they have their own brewery and distillery. In fact, one of the best of it’s kind. Voted best microbrewery in Finland in few years in a row, their beers and ciders are widely available in supermarkets around the country.

The brewery now produces around 500 000 bottles a year and uses raw materials that are native to Finland. The ciders are flavoured by Finnish blueberries and lingonberries, among others.

Some of the gems from their own distillery were also found in the bar, including this anniversary whisky bottle (below) to celebrate Finland turning 100 years old this year.

Below – gin from birch leaves and lingonberries, among other ingredients.

Usually night out would also involve a visit to a nightclub, but considering our age we eliminated that very quickly and opted for a good night’s sleep ahead of another working day.

Turku is not just booze and food, it has plenty of options for cultural vultures too (more on that later). But for me, exploring a new city always starts with food and drinks.

One word of warning – your wallet might throw a tantrum when the bill arrives. Alcohol is painfully expensive in Finland thanks to the taxes and strict laws. Choose wisely and drink responsibly.

Now excuse me, I’m off to get my Monday after-work reward – cold can of Lonkero!