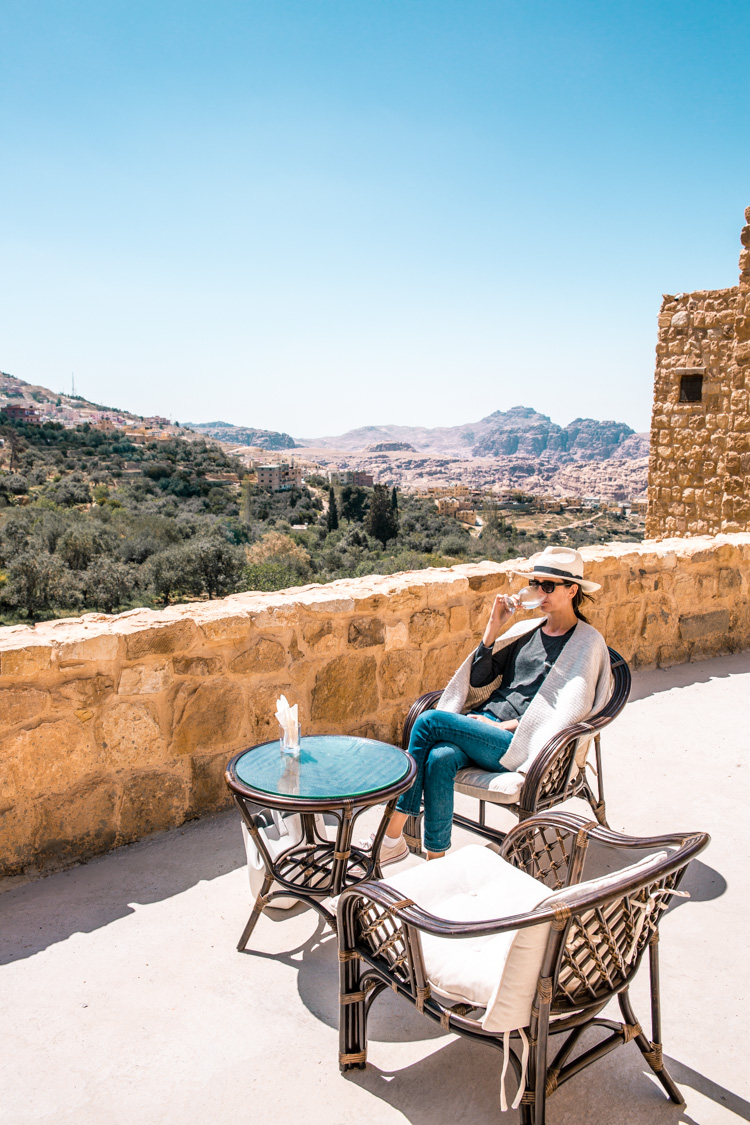 I’ve been in Jordan only for three days but it felt like I spent a whole month in the country. Full of experiences, emotions and excitement for things to come.

At that point, I didn’t even know that I haven’t seen the best yet.

The main course was about to arrive.

After a dramatic and absolutely dreamy drive from Wadi Rum to Wadi Musa, we finally arrived at the hotel, thanks to the help of one of the tourists staying with us at the camp.

Even though the village looked very small on Google maps, I had no idea it’s actually scattered around the hills.

I booked the Old Village Resort in Wadi Musa, which looked like one of the best choices for quality and value for money, unfortunately, it also comes with some impractical setbacks. The hotel was on the other side of the village and even though they offer free rides to the Petra visitor center, it doesn’t mean they will be your private taxi and take you there as much as you need (ahem… is that so much to ask???).

Another thing which was not mentioned anywhere was the fact that you can’t get any wine at the resort. Something I got used to even though staying in Jordan.

You can’t just take a casual stroll to the nearest restaurant, because – you guessed it – there aren’t any. The closest ones are by the Petra visitor center and I have personally watched too many crime shows to stroll casually through a small Jordanian village at dark without attracting unwanted attention.

Even the horses gave me weird looks.

As we waited for our room to be ready, we settled in a small terrace at the back of the restaurant and enjoyed the service which was being broadcasted to the whole village from a nearby mosque. In the distance, you can see the glorious rock formation – that’s where Petra is.

The hotel had a very traditional architecture and seemed like a perfectly peaceful place to stay. That was until I found out they have happy hour in the Movenpick resort every day (more on that later).

The connection to the history is evident everywhere in the village and the hotel was no exception. Right next to the reception area was a preserved area with the hydraulic system which dated back to the Nabatean times. Those were the handymen who transformed Petra into one of the most important cities of their time.

Just a little trivia – the name Wadi Musa translates into Valley of Moses and it said to be named after Moses who passed through the village. While here, here struck water from some ruck for his followers and Nabateans used this spring to carry the water through a network of these channels to the city of Petra.

After exploring the hotel and finally unpacking the luggage, we took a lift to the village centre, where we struck gold – Movenpick resort!

As it happens, they had happy hour there every day and the heavens were on our side as we arrived right in time.

After admiring the oriental interior details, walking around nonchalantly like I totally stay in a place like this every day, it was time to finally have a glass of wine.

It was hard paying attention to the drinks though. The bar was like a dream. Aladin’s dream (although I’m not sure if he was old enough to drink?).

The intricate details on the walls and ceiling with golden tones and shiny finish will make you are sitting in a palace.

In a country where wine glass comes close to 10 eur, we didn’t miss any chance to make sure our needs are properly catered for.

For two days we stayed in Wadi Musa, we were in the Movenpick Hotel the moment the happy hour started, until it ended, without a shame.  Every day we ordered Arak (if I remember the name correctly) and toasted to this wonderful adventure while enjoying the extra drink free (buy one get one free offers don’t come around as often as in Tesco).

One of our other ventures was this Cave Bar, close to the entrance to Petra.

It was actually quite disappointing, the cocktails were really poor and the food less than average (even Lonely Planet doesn’t get everything right). I think it’s because it’s managed by the 3 star hotel next to it and it probably shows. However, it was very cool and unique experience, especially if you go there in the evening and listen to the live music.

Jordan has some amazing wines and we were lucky to taste a few. After my arrival at home, I actually found out more about their wineries and I got very excited as that’s a great excuse to come back again.

At the end of our two-night stay, it was time to move on to the last night by the Dead Sea.

I will prepare a special update from Petra for next blog post, as that deserves a bit more than just a short mention!

On the way to the Dead Sea, our taxi driver luckily picked a route passing through Little Petra. Little Petra gets little credit unfortunately as it lives in shadow of the main attraction, but I have to say just driving through it felt like a dream.

A stunning landscape which takes your breath away!

I had to hold myself not to spam you here with too many rock pictures as I’m pretty sure by now you’re getting the message. Jordan is absolutely awesome!

If you have any questions about visiting Jordan, please drop me a comment below. I will be preparing a little handy travel guide where I leave all my wisdom in one place!

The Lost City of Petra

The Monastery in Petra, Jordan